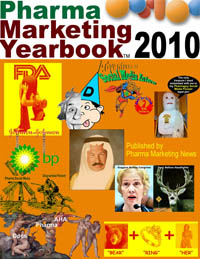 The 2010 edition of the Pharma Marketing Yearbook™ is a commemorative record of pharmaceutical marketing issues and highlights of the past year as seen through my eyes and the eyes of my “network” of readers, subscribers, colleagues and followers. It has all been documented here on this blog, which after all is meant to be a log of such things.

I’ve been told that people like lists, so here’s my list of the 10 Most Important, Awesome Pharma Marketing Highlights of 2010. I invite you to suggest your own list in comments to this post. There’s space reserved in the Yearbook — which will be updated periodically — for your list.

Awesome Highlight #1: I was quoted in TIME magazine!

Dude! That was awesome for me, but maybe not so much for you.

Awesome Highlight #2: FDA did NOT issue any social media guidance for the drug industry in 2010

Bummer! That’s got to be an important event even though it was a NON-event! Some people are giving up on the whole thing and saying “damn the torpedoes, full steam ahead!” Well, maybe not using those words. My Twitter pal Jonathan Richman — who also loves lists — says he is “more than a bit tired of hearing about ‘the guidelines'” and is “Ready, Willing, and Legal” to proceed with pharma social media “marketing” without guidelines. In fact, he says “not a single industry program on [his wiki] list has ever received a Warning Letter or Notice of Violation from the FDA. Someone is doing something and not getting into any trouble.” Novartis’s Tasigna branded “Facebook Share” social media widget may not be on Jon’s list, BUT Novartis DID get a warning letter from the FDA regarding that piece of marketing (follow the links in this post: “Update on FDA Regulation of Pharma Metadata & Impact on Search“). Come to think of it, THAT letter should have been included as a standalone AWESOME highlight of 2010, but I’m content to leave it as part of #2.

Awesome Highlight #3: The Hawaiian Shirt Off Pharmaguy’s Back!

Congrats! Alex Butler gets the first-ever Pharmaguy Social Media Pioneering Award in recognition of his pioneering efforts. Truly a nice guy! And this proves that I am on the same page as Jon about the possibility of being “legal” without guidelines. However, it takes an extraordinary person like Butler and his team at Janssen to do it without guidelines. Guidelines are for those idiots out there who insist on pushing the envelope and altering the playing field to their advantage. Just imagine a football game without sidelines!

Here’s just a bit of Alex’s comment he made in the Yearbook:

“Thanks for your work in 2010 John. Obviously a very personal highlight for me was receiving the Pharmaguy pioneer award, especially considering the fantastic list of people I had the honour to rub shoulders with on the nomination list. … For me though we are in danger of heading down the wrong road. Many companies are trying to do the right thing with the wrong people. … This is about communication- a fundamental change to the way we communicate about our business and our products, not about platforms. We need people with expertise in communications and in the positive sense, new marketing, to lead the cultural shift necessary within our industry.”

For more on that issue — finding people with the right expertise in new media communications — listen to this Pharma Marketing Talk podcast: The Coming Digital El Niño: Traditional Interactive Agencies are Facing Extinction.

And it wasn’t pretty! Yes, it’s possible for the pharmaceutical industry to do social media without FDA guidelines, but that doesn’t mean that they will do it right. A case in point is the experience that sanofi-aventis had with Shirley Ledlie, who I labeled a “disgruntled patient” because she overwhelmed S-A’s Facebook page with images of her bald head. You can read all about this by following the links in the 2010 Pharma Marketing Yearbook, which Shirley signed:

“As I was the ‘Disgruntled Patient’ feel proud that I managed to closed down the FB page of Sanofi Aventis. Although it reopened it no longer accepts comments from the public. This only goes to prove a point- only SA cant see that! Thank you John for including this episode in your Year Book 2010.”

Speaking of Social Media Faux Pas! Social Media Intern made the scene in 2010. “I enjoy changing the course of social networks, fixing an errant Facebook page faster than a speeding bullet, and jumping over the highest hurdles of any pharma legal/regulatory department,” says Social Media Intern. “As an intern I do not make much money. My job is to find pharma social media ‘dummies’ who launch social media campaigns without thinking!”

Awesome Highlight #6: Dark, Secret, and Fake Patients on the Internet

FDA Guidelines are irrelevant here! In 2010, we learned about “dark” networks that are not open to pharma marketers. You can read all about this by following the links in the 2010 Pharma Marketing Yearbook.

Awesome Highlight #7: I Learned How to “Pronounce Boehringer Ingelheim!

Say it! Funny story… I had to edit the podcast “Scientist Vs salesman: Which approach will enable your sales reps to raise their value to the industry?” to make sure we were saying it correctly! If only I had the rebus to help me — for more on that, refer to the 2010 Pharma Marketing Yearbook.

Who knew?! A pharma company can be both a feeble-minded digital idiot and a digital genius at the same time!

Whoa boy! 2010 was the year the dirt came out about physicians, medical schools, and advocacy groups who received payments from pharmaceutical companies. So far, disclosures have not been entirely transparent — more like translucent. Maybe the pharma industry will lobby Congress in 2011 to eliminate the part of the Health Reform law that requires ALL pharma companies to reveal such payments.

So what else is new?! 2010 was the year that Johnson & Johnson fell off its much ballyhooed pedestal. I was particularly dismayed that the CEO sent an unprepared underling to face the music before a Congressional Committee! Not a good precedent for women pharma executives when one of their own is hung out to dry like that.