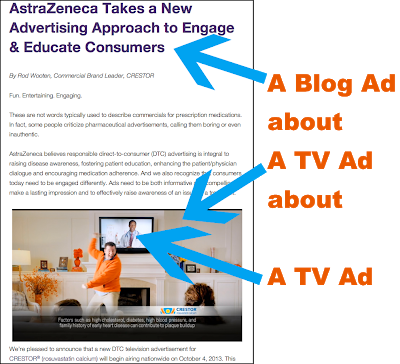 The post is titled “AstraZeneca Takes a New Advertising Approach to Engage & Educate Consumers” (find it here). I have a few words to say about the “new” approach below, but right now let’s just savor the “unique” approach of creating a blog ad about a TV ad, which is itself about a TV ad.

You might say the blog post has three degrees of separation from the traditional Crestor TV ad shown on the screen behind the dancing man.

This is not the first time that AZ has used the AZ Health Connections blog to post a DTC ad. See, for example, “AstraZeneca Posts an Arimidex DTC Ad on Its Corporate Blog – Will It Go Viral?” And this is not even the first time AZ has posted a Crestor ad on the blog (see “New CDC data shows drop in number of adults with high cholesterol“). This time, the blog post is previewing a new DTC ad campaign that will begin October 4, 2013.

“This new ad, called SuperFan, uses light humor as a means to gain attention to the importance of managing cholesterol,” says Wooten. “The main character takes an interest in cholesterol management and CRESTOR like some ‘super fans’ do for their favorite team, thus illustrating the type of engagement patients should have in their own healthcare.”

Now for that claim that the previewed ad is a “new advertising approach to engage and educate consumers.”

According to Wooten, this ad was created because AZ recognizes that “consumers today need to be engaged differently. Ads need to be both informative and compelling to make a lasting impression and to effectively raise awareness of an issue or a treatment.”

IMHO, the SuperFan ad is a #SUPERFAIL in terms of being any more “informative” and “compelling” than any other Crestor TV ad.

Perhaps, however, the ad will make a “lasting impression” on real-life “super fans” who probably could benefit from a little more exercise and eating a little less fatty foods. The SuperFan ad, however, pays scant attention to those life-style issues — merely stating “When diet and exercise alone aren’t enough to lower cholesterol, adding CRESTOR can help.”

Join Me at the STEM 4 Health Berlin Meetup on September...