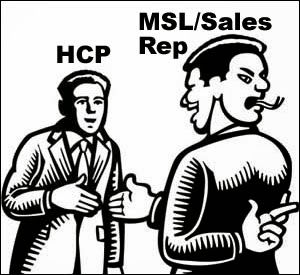 Celgene was accused of promoting its cancer drug Thalomid and related compound Revlimid for uses not approved by U.S. regulators in a newly unsealed lawsuit filed by Beverly Brown, an ex-“saleswoman” who, according to the complaint, was employed by Celgene from 2001 to 2011  (see “Celgene Whistleblower Alleges Off-Label Marketing“).

The U.S. Justice Department chose not to intervene in the case, which is bad news for Ms. Brown — she won’t be able to collect a lucrative share of any fines resulting from a federal whistleblower case.

Aside from that, this case raises an interesting pharma marketing/regulatory issue; namely, are Medical Science Liaisons being deployed by pharma as sales reps in disguise in order to market drugs off-label? Also, how does the FDA regulate the communications between MSLs and healthcare professionals (HCPs)?

“Professionals (employees of pharmaceutical companies) — most with advanced medical, pharmacy or science degrees — that offer credibility and objectivity of a peer, but also provide an insider’s knowledge of their companies and products. MSLs coordinate the flow of clinical information and manage important key opinion leader (KOL) relationships, which can be critical to a product’s success at any stage of its life cycle. The MSL has a thorough knowledge of specific disease states and the science that supports his or her company’s products within those disease states. The MSL is also involved in providing medical scientific information and literature for physician education and is involved with planning medical education activities such as symposia, etc.”

According to the complaint, “Celgene gave Relator [Ms. Brown] the title ‘Immunology Specialist,’ which indicated to physicians that Relator was a medical professional, as opposed to a sales representative. Relator, however, has no formal medical training and never studied immunology. Nonetheless, Celgene required Relator to hold herself out as competent to educate physicians and other medical practitioners in immunology.”

In addition, says the complaint, “Celgene tasked Relator and the other 100-plus S.T.E.P.S. Field Coordinators across the country to physicians’ offices where they instructed physicians on procedures for registering themselves and their patients with S.T.E.P.S. and the requirement to contact Celgene directly each time the physician wrote a Thalomid prescription. It was during these S.T.E.P.S. meetings with physicians that Relator marketed, at Celgene’s direction, Thalomid for off-label uses.”

If true, this is a pretty nifty way of gaining access to hard-to-see physicians while also side-stepping FDA regulations requiring sales rep communications to remain on label. Because MSLs are typically qualified healthcare professionals — pharmacists or MDs — they can have “peer-to-peer” off-label communications with other HCPs.

Physicians value knowledgeable drug company representatives who keep them informed, protect them from prescribing the wrong drug, talk to them without regulatory constraints, and keep them stocked with samples. They also want someone who talks like they do. In other words, they want another health professional and not a sales person at all!

But I assumed that these MSLs would not engage in promotional activities, but refer physicians to non-personal sales channels to handle sales-related issues such as ordering samples, etc. I never dreamed that drug companies would engage in “bait-and-switch” schemes as Celgene is alleged to have done; i.e., the complaint alleges that Celgene dispatched Ms Brown to medical practices “under the guise of assisting physicians with the FDA-required S.T.E.P.S. program. In reality, Relator’s and other sales representatives’ purported assistance with S.T.E.P.S. was a ‘bait-and-switch.’ Celgene used the program as an additional opportunity to off-label market Thalomid to captive physicians [my emphasis] who required help in complying with S.T.E.P.S.”

An Interesting Chart – Is There One Like This for Drug...