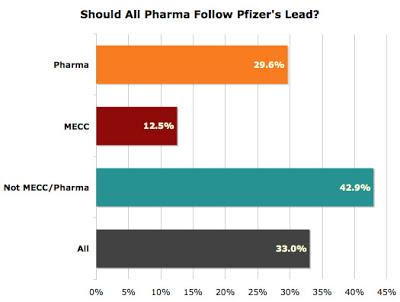 Having nothing better to do on a Saturday morning, I posted results of my latest analysis of sources of Continuing Medical Education (CME) funding reported by ACCME (Accreditation Council for Continuing Medical Education) in its 2010 annual report (see “Pharma Support for Accredited CME Continues to Decline“). I was tardy in doing this yearly task — the report was made public last July. Better late than never.

The real reason why I posted my ACCME analysis over the weekend, however, is because I had in my hands a study of physician attitudes about commercial support of continuing medical education that was going to be published on Monday and the data was relevant to the post I made after the study was published (see “Physicians Are Concerned About Pharma Support of CME, But Are Unwilling to Pay Their Own Way!“).

In the meantime, Derek Warnick (@CuratioCME), CME Director at Curatio, an ACCME accredited medical education company (MECC), posted a response to my analysis of the ACCME data (see “Response to CME Post on Pharma Marketing Blog“). Derek takes issues with many points I made in my analysis, but the most interesting comment he made was this:

“I’m going to let you in on a little secret (although, if you work for an accredited CME organization, you probably already know this): those numbers used by the ACCME to report Total Commercial Support? Yeah, they’re not as cut-and-dried as you might think. Sure, you can look at them and say, “Hmmm… looks like MECCs are getting a LOT less commercial support.” But here’s the thing: the Total Commercial Support numbers you see only reflect the amount of commercial support given directly to the accredited provider sponsoring the activity [Derek’s emphasis].

This raises a couple of interesting question. First, however, let me say that this may not be as big a secret as Derek thinks.

In July, 2008, Pfizer announced that it would no longer directly fund CME courses provided by for-profit, third-party companies (MECCs) although it would keep paying for courses offered by medical schools, teaching hospitals and medical societies. Shortly after that, I hosted a survey (see “What’s the Best Way for Pharma to Support CME?“) that asked respondents if they thought all pharmaceutical companies should follow Pfizer’s lead. The following chart shows the results:

An anonymous respondent clued me in on the “little secret” Derek referred to in his post:

“Med schools, teaching hospitals, and medical societies frequently use MECCs to create their CME anyway, and unless CME is funded by pooled grants (ie, from multiple pharma companies), the bias will be no less than it is in the MECCs, or not much less.”

Derek claims that because of this kind of “subcontracting,” MECCs may not be getting as small a piece of the CME funding pie as I estimated from the ACCME numbers. Fair enough. But I note that only a small fraction of MECC respondents to my survey thought it was a good idea for other pharma companies to follow Pfizer’s lead. That’s understandable, because MECCs would have new academic bosses to deal with who may nickel and dime them. It’s much better to get your slice of the pie direct from the baker than to beg a piece of someone else’s slice!

I think Derek agrees with my analogy. He said:

“How often does this happen? Well, I can’t really speak for other companies, but my guess is it hapens (sic) a lot more frequently then it did 5 years ago. As already mentioned, the Pfizer’s and OMJ’s of the world no longer provide commercial support to MECCs. That eliminates a pretty big chunk of money that MECCs used to report to the ACCME. The alternative now is to find another accredited partner, such as a medical school or physician society, to co-sponsor the activity. That medical school or physician society is the accredited provider and they receive the commercial support. So in the past, where a MECC would have directly received a $100,000 grant from Pfizer (and reported it all to the ACCME), now a co-sponsor receives the $100,000 grant, reports it all to the ACCME, and then sends $50,000 to the MECC (or whatever the split is) for their role. That’s a $200,000 swing in how the commercial support is reported to the ACCME, when in reality the actual difference is only half that. Again, the ACCME is OK with this.”

So, Derek and I agree that MECCs are losing more than just crumbs from the pie, but we differ on exactly how big the pieces really are. The more important issue, however, concerns bias. Is there any less bias in commercially-supported CME if industry funding in channeled through medical schools and medical societies to for-profit MECCs than if the funding went directly to MECCs?