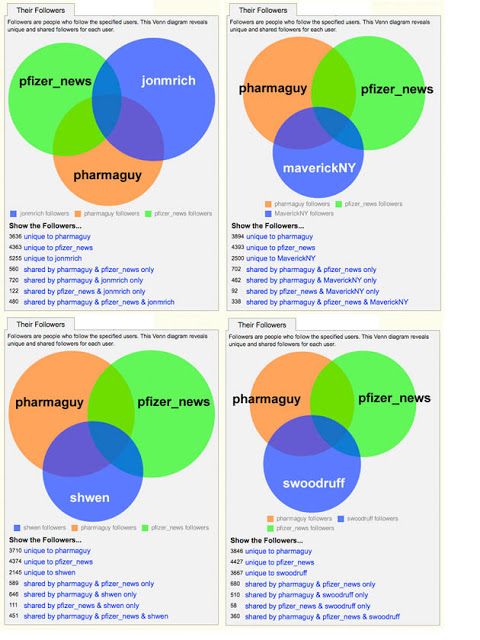 This morning I learned about “Follower Wonk,” a neat Twitter application that creates Venn diagrams showing the overlap among followers of up to three different Twitter accounts. It does other stuff, but I was mostly interested in looking at the follower overlap.

I compared my follower profile with that of @pfizer_news (Pfizer’s official Twitter account) and a few of my Twitter pals (@shwen, @jonmrich, @maverickNY, and @swoodruff; except for @shwen, these people are consultants to the pharmaceutical industry or work in agencies servicing the industry; @shwen is employed in a pharma company as a new media expert). The charts are shown below (click for an enlarged view).

What does this mean? Well, if more Pfizer Twitter followers also follow me than follow the other “experts,” I guess what I have to say is more relevant to these people. The people who follow me and Pfizer are in the pharma mainstream. I have been surveying my followers and have put together a profile, which you can find in this Pharma Marketing News article: “Pharmaguy’s Twitter Followers: What Do They Want and How Is It Relevant to You?“

Let me restate it this way: I made a comparison between me and the best of the best on pharma’s “team.” By which I mean that @jonmrich, @MaverickNY, and @shwen are very “pro” pharma and have been known to support many pharma marketing practices that I have been critical of. In that context, it was interesting to ME and probably ONLY to me to compare who follows these people with who follows me. The fact that I can compete with these industry advocates to reach the same audience that follows the world’s largest pharma company means a lot to ME because it proves I am not of marginal influence among industry watchers. From time to time it is nice to toot one’s own horn, which is what this is all about.

You can see from the comments that I may have offended some of my colleagues. I am truly sorry for that and hope we can move on.

Indication Bloat – The Next DTC Issue