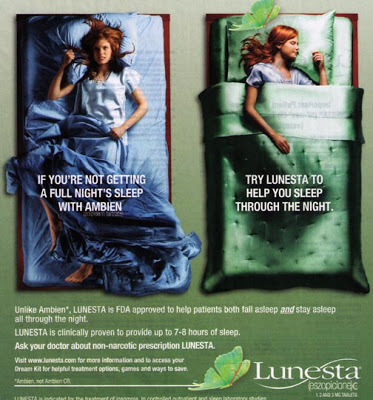 You’ve GOT to check out the new Ambien CR web site to witness what has to be a new low for “authentic” pharmaceutical marketing: patient testimonials from people who are “not actual patients” and not real people at all! 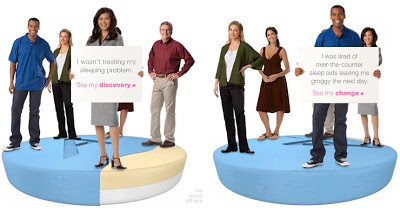 Take Alice, for example. That’s her on the left in the above image, which is a collage of two iterations of an animation of a rotating Ambien CR pill with what appear to be real Ambien CR users telling us why they are “sticking” with Ambien CR. Brian, shown on the right, was “tired of over-the-counter sleep aids leaving me groggy the next day.” Alice, on the left, says she “wasn’t treating my sleeping problem.”

You can click on Alice and get more information, including a detailed testimonial as shown in the screen image below: 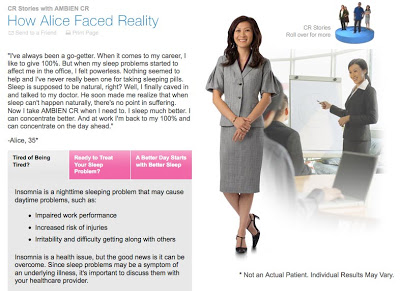 Click on the image to enlarge it and see what Alice has to say.

Obviously, actors are used in direct-to-consumer (DTC) Rx drug ads all the time. Sometimes, we are lead to believe that actors playing doctors in TV ads are real doctors or actually rowing when they are not (see “Jarvik: A Modern DTC Tragedy“). On TV we also see actors portraying patients. Sometimes they even speak and say how the drug helped them. Most often, however, these “patients” don’t really say anything. They certainly are not identified by name and age as are the Ambien CR “patients” depicted above.

This new online Ambien CR promotion was no doubt developed in response to a print ad by Lunesta, which compared a wide-awake woman who took Ambien to a pleasantly-asleep woman who took Lunesta:

The Lunesta ad is a bit unfair in that it is “comparing apples to oranges.” The more relevant comparison would be between Lunesta and Ambien CR, which, like Lunesta, is approved to help people stay asleep all night.

Consumers may not realize the difference between Ambien and Ambien CR when presented in this context, hence the new Ambien CR promotion, which tries to highlight the difference even if it has to rob Peter to pay Paul (ie, take shots Ambien — one of those “over-the-counter” sleep aids that may be leaving Brian groggy).

[Note: Mark Tosh, Editor-in-Chief of DTC Perspectives, commenting on this ad in DTC Insights said “This new approach from Lunesta seems to be moving in a direction that could draw more scrutiny from critics and regulators who want to impose limitations on DTC.”]

Although there is a disclaimer stating that the person depicted on the Ambien CR screen is “not a real patient,” the Ambien CR promotion on the Web site resembles a social networking post made by a real person claiming to be an Ambien CR user. It appears to me that Sanofi is trying to capitalize on the fact that testimonials by real — or seemingly real — people are one of the most important kinds of information that consumers rely upon to make decisions. The only problem is, however, it could not get these testimonials from real people or it didn’t feel it had to spend the money to do that. It’s just another example of how pharmaceutical companies do not wish to engage with their customers for fear that they may hear more about adverse events than about product benefits.

Personally, I don’t think it’s acceptable to put quotes around the product promotion to make it look like this is something a real person, other than a real marketing person, has said. The disclaimer says “not a real patient.” What it should say is “Alice” is “not a real person and did not actually say what is written on the screen and enclosed in quotes.”

P.S. How did they get all those people to stand on a tiny pill? Wendy Blackburn over at ePharma Rx Blog has the answer.