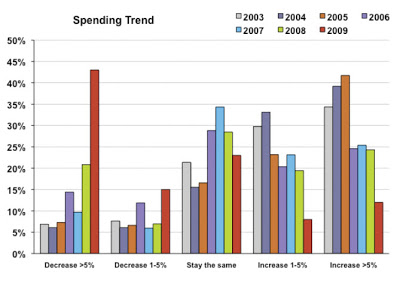 There are several polls out there that suggest my prediction might be on the high side.

Forty-five percent (45%) of respondents to a poll I have been running on and off since November 2008 say DTC spending will decrease this year compared to last; Only 12%, however, agree with me and say it will decrease more than 10%. About 35% see spending increasing and an optimistic 22% see it increasing by more than 10%! Here are the results: 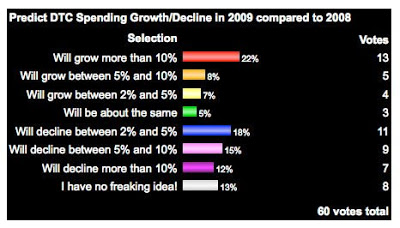 You can take this poll right now, add your prediction to the mix, and view the current results.

Pharma Marketing News has been running its Future of DTC Advertising Survey since November last year. One question in that survey also asks respondents to predict how DTC spending in 2009 will compare to that of 2008. The results were reported in the January, 2009, issue (see “The Future of DTC Advertising: Is a perfect storm brewing?”; PMN Reprint #81-01) and are shown below: 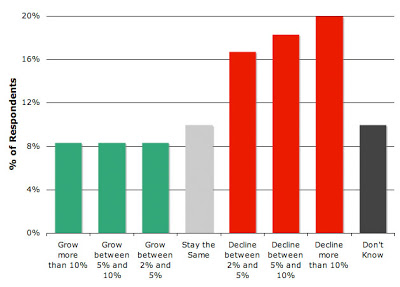 In this study, the percentage of marketers saying they will decrease DTC spending rose precipitously — from 28% in 2008 to 58% in 2009 (about 43% believe the decrease will be greater than 5%). That 58% is pretty close to the 55% in the PMN survey who also believe spending will decrease. Also, 25% of the respondents to the Cegedim Dendrite survey believe spending will increase compared to 24% in the PMN survey. The other numbers in these two surveys are pretty similar as well. It’s almost as it Cegedim Dendrite copied the results of the PMN survey published in January!

BTW, regardless of what the experts say, I’m sticking to my prediction of an 11% decrease in DTC spending this year compared to last year.

Do Pharma Marketers Need a Thick Skin or Will a...