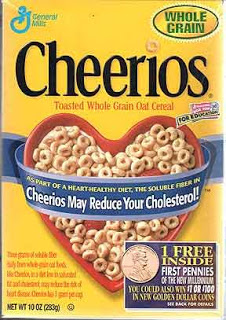 Pharma advocates are all a-Twitter about FDA’s recent Warning letter to General Mills regarding Cheerios, the breakfast food. FDA says the labeling on the Cheerios box makes unauthorized health claims, namely “you can Lower Your Cholesterol 4% in 6 weeks.”

FDA said to make such a claim, General Mills must submit a New Drug Application (NDA) with clinical trial evidence to support that claim. In other words, FDA considers Cheerios to be a drug when it makes such claims:

“The product is also a new drug under section 201(p) of the Act [21 U.S.C. § 321(p)] because it is not generally recognized as safe and effective for use in preventing or treating hypercholesterolemia or coronary heart disease,” said the FDA letter. “Therefore,under section 505(a) of the Act [21 U.S.C. § 355(a)], it may not be legally marketed with the above claims in the United States without an approved new drug application.”

Well, all my Twitter pals are Twittering about this and Mark Senak (EyeonFDA Blog) thinks the FDA has its priorities “askew” because (1) FDA chose to issue a rare Warning Letter rather than an “Untitled” letter:

Senak also compares this FDA action with the 14 untitled letters it issued regarding a particular method of pharma search engine marketing (see “The ‘One-Click Rule’: Rant or No Rant?“):

“Yet,” said Senak, “when FDA’s DDMAC issued its infamous 14 letters on April 2 which suddenly declared the years’ long practice of Search Engine advertising off limits to companies, the FDA removed from the search engine scene notices about drug treatments when a user is doing a health search about a particular condition. That means now, if you search on a term like ‘diabetes treatments’ as I did this morning, and you may see an ad that suggests that you can cure your diabetes naturally without drugs.”

I agree that a Warning letter may have been overkill and that there is a problem when charlatans are free to claim cures with impunity (ie, nothing but “patient” testimonials and bogus clinical trials that have not been reviewed by the FDA). An example is the paid ad for “Natural Diabetes Treatmnt” seen in the screen shot below (click the image for an enlarged view): 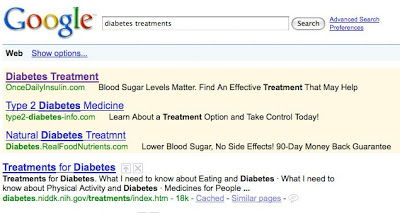 When I click on “Natural Diabetes Treatmnt” I am brought to a site that claims “Lower your blood sugar, safely and effectively with absolutely NO SIDE EFFECTS !! GUARANTEED !!”

The other two top ads (in the #1 and #2 positions) are for Lantus.com and Junivia.com, two FDA-regulated products for the treatment of diabetes. One is produced and marketed by Sanofi-Aventis and the other by Merck. Both of these, by the way, are just one degree more balanced in its claims than is the “Natural Diabetes Treatmnt” ad.

Two out three is not a bad score for the pharmaceutical industry! and nobody should imply — as Senak did — that the FDA’s warning letters to drug companies about search engine ads will result in a “public health threat” because it “takes the drug ads out of the search equation.”

Senak’s search example proves that drug search ads are not out of the equation.

Senak also claims that the FDA has “declared the years’ long practice of Search Engine advertising off limits to companies.” That simply is not accurate. The FDA declared a “certain” tactic off limits; ie, using the drug brand name in conjunction with the indication without including side effect information.

I do not think, therefore, it is accurate to portray the FDA priorities as being “askew.” Rather, as Bruce Silverglade, director of legal affairs for the Center for Science in the Public Interest, said: “the agency is exerting its authority under President Barack Obama” (see here). This is something that everyone — including Senak — has wanted the FDA to do ever since it was hobbled by the Bush administration.