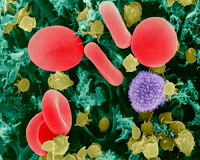 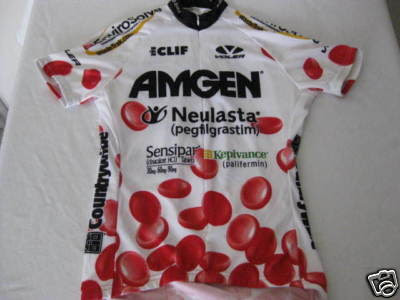 Mike Huckman of CNBC’s Pharma’s Market Blog says a colleague of his who lives near AMGEN headquarters in Thousand Oaks, California says “pedal-pushing company employees wearing jerseys like this one … are a constant (she says sometimes annoying) presence on the streets around those parts. The red dots that look like rose petals or throat lozenges are supposed to be blood platelets.”

Sorry, Mike. But those are DEFINITELY red blood cells, not platelets. Who among us would know what a platelet looks like? No-one, that’s who. So, while it’s not technically correct to show red blood cells representing a product that acts on platelets, it’s a necessary “dumbing down” of science for the sake of creativity and saleability. Platelets, after all, don’t look like pretty rose petals. The ugly yellowish blobs surrounding the red blood cells in the image on the left are platelets.

NOTE: Mike and I may BOTH be wrong! Christiane Truelove wrote in Pharma Blog Review: “Amgen shouldn’t have put red blood cells on the shirt in the first place, as Neulasta stimulates white blood cells, which look like this” (you’ll have to go here to see the white blood cells. But I think the purplish fuzz ball in the image shown here is a white blood cell.)

Who’d want a bike jersey emblazoned with yellow blobs? Come to think of it, who’d want a bike jersey with “AMGEN” and “Neulasta” written on it in big black block letters? I bet there are quiet a few nerdy, bicyclist hematologists/oncologists out there who would like one! Too bad that Amgen is a signatory to PhRMA’s PhRMA Code on Interactions with Healthcare Professionals, which prohibits Amgen from giving these away to physicians, unless of course they are among the Tour spectators. I suppose Amgen is free to give away the jerseys to them at the event.

Huckman also points out the irony of a “biotech company that makes EPO, what is by nearly all accounts the most popular performance-enhancing drug among cyclists, is the major sponsor of a bike race [Amgen Tour of California] featuring one defrocked, steroid-using racer and another one who has long been rumored to juice up.” He was referring to superstar cyclists Lance Armstrong and Floyd Landis.