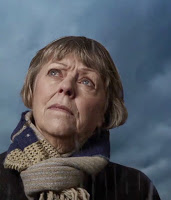 Boehringer Ingelheim (BI) is leading the pharma industry in posting disease awareness videos on Youtube. Several focus on cardio-respiratory conditions such ad COPD. See, for example, “2 SIDES OF LIVING WITH COPD,” which I said “Tugs at Heart Strings, Then Scares the Bejeezus Out of Us! Is it necessary to pull at our heart strings and then bring us down with scary death mask-like imagery?”

Well, if you thought that video was scary, you might “shi* your pants” watching “How does it feel to live with IPF?”, which is an even scarier disease awareness video from BI.

IPF is shorthand for Ideopathic Pulmonary Fibrosis – a disease in which tissue deep in the lungs becomes thick and stiff, or scarred, over time. It usually affects middle-aged and older adults. BI markets OFEV for treating IPF. You can find more information on IPF and results from a BI survey here.

The dark image of a woman starring off into the dark sky was captured from the video, which you can see below (click on “Read more”). Why always women?

But there’s something even odder, more ominous about this video.

There’s no sound! No music. No voiceovers. Nada!

At first, I thought something was wrong with the audio on my computer, but nope.

Not only that, there is minimal motion in the 5 vignettes that make ip the video. Only certain elements in each vignette move such as the woman inhaling and exhaling laboriously while climbing the stairs unable to catch up with her grandson. How sad! Again, pulling at our heart strings.

[NOTE: BI, in a comment to this post, noted that this technique is called “cinemagraphs,” which are still photographs in which a minor and repeated movement occurs. “We wanted to use cinemagraphs, a relatively new format for the pharmaceutical industry,… so we could really grab people’s attention,” said Patricia Alves, Social Media Manager at Boehringer Ingelheim. For a full overview of all the cinemagraphs and the survey findings you can find them here.]

But the silence is the hook that really draws you in. Freaky!

Will Pharma Spend More on eMarketing than on TV Advertising by...