What makes a mobile app effective?

That was the question posed by Jim Dayton (@JimDayton), Snr Dir Emerging Media at Intouch Solutions, at the iPharmaCONNECT conference this past Monday. As I suggested in a previous post, Dayton was not able, IMHO, to answer the most important questions about effectiveness; namely, provide truly useful KPIs (see “Pharma Social Media Religion Versus Science“).

Today, I can explore what makes an app effective based on my personal experience with an app called “Sleep Cycle.” Available in the iTunes store (here), Sleep Cycle is “an alarm clock that analyzes your sleep patterns and wakes you in the lightest sleep phase – a natural way to wake up where you feel rested and relaxed.” After setting the alarm to the time you wish to wake up, you put your iPhone under your pillow (actually, next to it as shown in the photo below) and the app collects data about your sleep pattern during the night. 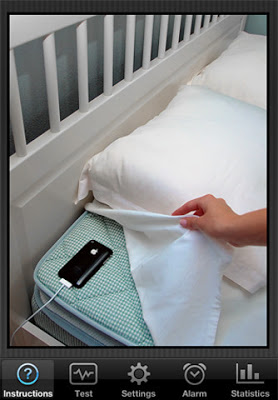 The app uses the iPhone’s accelerometer to detect and measure your movements during the night. According to the developers, Sleep Cycle calculates the optimal time to wake you up during a 30 minute window that ends at your set alarm time.

It was amazingly simple to use. That’s the first characteristic of an effective app.

But does it work? I must admit I had my doubts. It could be like those pads that draw out bad karma from the soles of your feet while you sleep. Yeah, sure. After my first use last night, I can say that it definitely worked!

Here’s the chart showing how I slept last night: 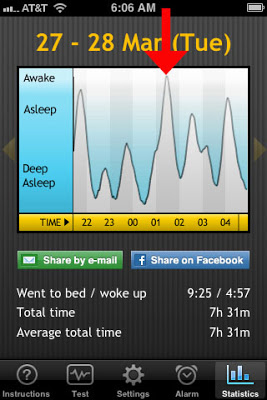 But could the chart just be faked? The app could have generated a random series of peaks. How would I know? Here’s why I know it is for real. At about 1 AM in the morning we experienced a power failure that lasted only a minute or so. It was enough to wake me and my wife. The red arrow indicates the highest peak in my sleep cycle because I (and my wife) definitely woke up after hearing alarms from other digital devices in the bedroom — such as beeps from the cable box as it turned back on.

What’s the utility of such an app? First of all it’s fun! Secondly, it records real data that I can use to help me get a better night’s sleep. If I were being treated by my doctor for insomnia, I could send the data by email to my doctor. If I was being treated with a drug like Lunesta, I could determine if it really helped (although I should know it helped or not without charting my movements during sleep).

The third reason why this is an effective app is the most important one. I will use it every night. The novelty won’t wear off because it fits into my routine of charging my iPhone every night when I sleep — right there next to me on the night stand. This is an app that keeps your phone charging while it works instead of wasting battery life!

One last thing. The app is NOT free — it costs $0.99, which is practically free, but makes me feel that I have a stake in using it. No matter how much money you make, you not likely to toss a dollar bill into the trash.

Sunovion Pharmaceuticals (formerly Sepracor), which markets Lunesta (a sleep aid drug), could have developed this app, but here’s a better suggestion: SPONSOR it through advertising. I’m not quite certain how advertising works on smartphones, but I have seen free apps that include ads that pop up when the app is started or during its use. It’s not usual for ads to appear in apps that you pay for, but Sunovion can pay the developers $0.99 for each app download that includes its ad — the app would be free to users.

Sleep Cycle is one the top apps in terms of downloads all over the world. It claims “We are now helping more than 1 000 000 people to wake up rested!

While number of downloads is not a KPI for developing a successful app (except for a paid app, that is!), it is a metric that advertisers love to use to judge where they should place ads.

How are branded drug ads within smartphone apps monitored by the FDA? What PhRMA DTC guidelines are applicable? How could this be done in countries that don’t allow DTC advertising?

Those are all good questions to ponder. First of all, I’m not aware of any direct-to-consumer (DTC) drug ads running within apps. There are no PhRMA or FDA guidelines for advertising drugs on smartphones. But I can imagine that “reminder ads” would pass muster. For example, a simple ad that just mentions Lunesta with the green moth logo and link to lunesta.com would seem to be OK (in the U.S.) although I personally don’t like reminder ads. Another option is to run ads that do not mention the drug at all – like this Google ad that links to lunesta.com:

I’m not sure how much Sunovion pays for this ad every time someone searches for “insomnia.” It could be less than $0.99.

P.S. One fly in the ointment: I’m not completely sure that Sleep Cycle measured just MY movements during the night or the combined movements of me and my wife. If it’s the latter, that would make the data useless for diagnosis by my physician.

This illustrates a major problem with health apps like this; ie, Garbage In, Garbage Out. It’s similar to problems I have already noted in apps that are not vetted by being FDA-regulated or by independent testing (see “Some Unregulated Physician Smartphone Apps May Be Buggy“). I probably can make a lot of money being the “Consumer Reports” of health apps!