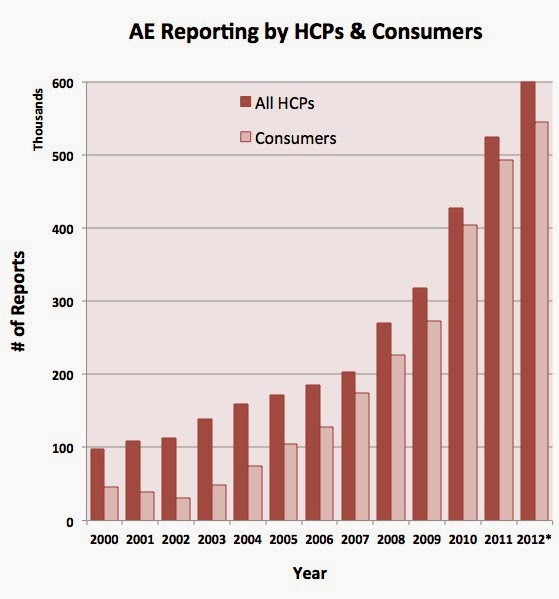 FDA resurrected a data mining project that it had abandoned for “lack of funding” but “just days after the agency announced the project’s return, it is once again cancelling the project,” reports Alec Gaffney (see “FDA Data Mining Project Proposal Once Again Withdrawn“).

The project would have developed “predictions for safety signals that have not yet been recognized for drug candidates that have come to the FDA as New Drug Applications (NDAs),” which is a pretty radical idea, especially if it caused fewer dangerous drugs from being approved in the first place.

It does seem that more dangerous drugs are being approved by the FDA. As shown in the chart above/left, DEATHS reported to the FDA via its adverse event reporting system have increased dramatically in the last few years for which data is available.

Between 2003 and 2012, FDA received 588,000 death notices via Adverse Event Reports (AERs). This is scary considering that FDA’s adverse event reporting system is notoriously inefficient. I’ve heard that FDA captures only about 10% of drug adverse events.

The number of adverse event reports received by FDA is also increasing dramatically as shown in the following chart:

It seems to me that there is a struggle within the FDA to reverse these trends by accessing better data and trying to prevent approval of dangerous new drugs. That they have withdrawn the above mentioned study may be a sign of the political pressure brought to bear by the drug industry to squash such projects. It’s only conjecture on my part, but all these aborted efforts by the FDA are very suspicious, IMHO.

Globally, Pharma’s Digital Spend is (Still) Only 6% of Total Promotional...