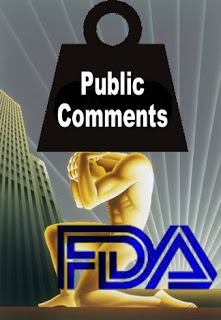 Yesterday, I started my Quixotic quest to impel the FDA to make available for public viewing the comments that have been submitted to Docket FDA-2009-N-0441: Promotion of FDA-Regulated Medical Products Using the Internet and Social Media Tools (see “Dear FDA: Where Are the Public Comments Regarding Regulation of Internet, Docket FDA-2009-N-0441?“).

Before I posted that entry in this blog, I e-mailed Jean-Ah Kang, Special Assistant to the Director, DDMAC – CDER, and asked why comments were not visible to the public.

Within a few hours she responded: “FYI, we are working with our counterparts in the Division of Dockets Management to ensure that all comments are posted for public view.”

A few hours later, lo and behold, several comments and documents that were posted on December 2, 2009 were visible and available to download.

This quick response seems to have caught some of my FDA-knowledgeable and government-skeptical (Ayn Randian) readers by surprise as you can see from this discussion on my Facebook page:

Bruce Grant (@grantbw): John — Check 21 CFR for regs for FDA Part 15 procedures. Public comments are made public ***once all the comments are in””* (i.e., once the docket is closed in February, 2010). FDA official response (possibly including answers to the questions you pose above) will come later — most likely in the form of a draft or final guidance document.

John Mack (@pharmaguy): Well, I guess that’s that then! BUT, one comment IS public and it was stated that it may take several weeks for comments to appear. If what you say is true and FDA MUST abide by the regs, why not say so during submission process?

John Mack: I think I found part 15 and I don’t find what you mention. It merely states: “A person may submit information or views on the subject of the hearing in writing to the Division of Dockets Management, under §10.20. The record of the hearing will remain open for 15 days after the hearing is held for any additional written submissions, unless the notice of the hearing specifies otherwise or the presiding officer rules otherwise.”

Bruce Grant: In this case the record is being held open until February, 2010 and won’t be made public until it is closed. Regulations.gov seems to be an entirely different channel…not actually connected to the Part 15 process. And it seems not to be monitored closely. It was originally supposed to be a channel whereby you could register “electronically” to attend the November hearings…but everybody I knew who tried that ultimately had to send snailmail directly to Jean-Ah Kang to get in.

John Mack: Yeah, jean-Ah did apologize for the way comments were being handled through Regulations.gov. But, tell me, can you cite the reference for your belief that the record won’t be made public until comments are closed? And is there a difference between part 15 hearing requirements and a comment period AFTER the public hearing?

John Mack: Dmitriy, I love it when you channel Ayn Rand!

Dmitriy Kruglyak: I am a proud Randian! By the way, check out the song/video I just posted on my profile, you’ll love it.

John Mack: Well, I’m not an anti-tax advocate, but I agree with everything in that song!

Dmitriy Kruglyak: Exactly! I guess doubting government’s ability to do anything right is not considered “crazy” anymore!

John Mack: Calm down. There’s lots of things that the US government does right and that I am very proud of. If only those were a higher percentage of what it does, there may be no more Randians!

Dmitriy Kruglyak: I love being proven wrong about it, unfortunately they are a long way from winning over Randians!

John Mack: I just received an e-mail response from Jean-Ah Kang, Special Assistant to the Director, DDMAC – CDER, in response to this post. “FYI,” said Jean-Ah, “we are working with our counterparts in the Division of Dockets Management to ensure that all comments are posted for public view.”

Dmitriy Kruglyak: Guess not all hope is lost. The real question is what happens when nobody is looking.

Randians like Dmitriy are not convinced that any agency of government can do any good. This time, however, Atlas (ie, FDA) did not shrug, but responded to criticism quickly and actually corrected itself.

Unfortunately, however, only a few — less than a dozen — comments are available for public view on the www.regulations.gov Web site. All of these were submitted by 2-3 people (myself included). Where are all the others?

By all means, LET’S KEEP LOOKING! You too, Dmitriy and all my other Randian friends!

Another BI “Educational” Game That I Don’t Get — Literally!