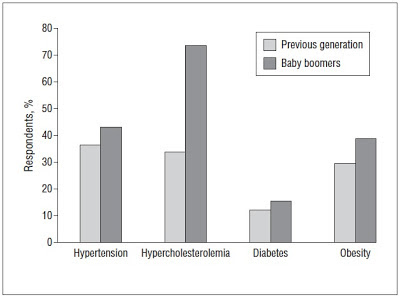 I just read some surprising results of a study published in Arch Intern Med. (2013;173(2):1-2) regarding the overall health status of aging baby boomers compared with the previous generation. The authors analyzed data from the National Health and Nutrition Examination Survey (NHANES), including NHANES III (1988-1994) (for previous generation) and the NHANES for 2007 to 2010 (for baby boomers), focusing on respondents who were aged 46 to 64 years during either period. “The 2 cohorts were compared with regard to health status, functional and work disability, healthy lifestyle characteristics, and presence of chronic disease.”

Here’s a chart that shows the proportion of each cohort (baby boomers and previous generation at age 46-64 years) with hypertension, hypercholesterolemia, diabetes, or obesity:

In other words, we all have high cholesterol! Of course, the line that separates “normal” from “high” cholesterol has moved significantly downward from one generation to the next, thanks in part to the push by the drug industry to sell more cholesterol-lowering drugs.

Coincidently (?), baby boomers were also more likely to have diabetes. I inserted a ? there because I recall a New York Times OpEd piece by a well-known cardiologist who said Americans are being “over-dosed” with statins to treat high cholesterol: “It is only with the more potent statins — Zocor (now known as simvastatin), Lipitor (atorvastatin) and Crestor (rosuvastatin) — particularly at higher doses, that the risk of diabetes shows up,” said Dr. Topol. “The cause and effect was unequivocal because the multiple large trials of the more potent statins had a consistent excess of diabetes.” I’m weening myself off statins because of a history of diabetes in my family (see “Bad News for Potent Cholesterol Drug Users, but Not Me!“).

The data from this study suggests to me that too many baby boomers are taking statins to treat what they call “high cholesterol” and not getting the benefit.

I’m so glad I quit smoking! Now to get more serious about exercising: regular exercise was significantly less frequent (35.0% vs 49.9% exercise ) and more than half of baby boomers reported no regular physical activity (52.2% vs 17.4%).