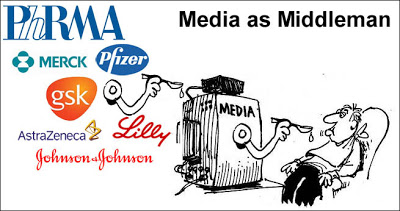 My blogger friend Rich Meyer went on a bit of a rant against “bad journalism” and how pharma is often misrepresented in the news media (see “Bad journalism paints unfair picture of pharma industry“).

The drug industry has consistently blamed the news media for painting an “unfair picture” (see, for example, my poll of readers here). I believe, however, that when you look at the evidence, you will find that there is a much higher percentage of articles in major media that paint a “positive picture” of the drug industry and often major news media merely quote verbatim from drug company press releases (see, for example, “The Cymbalta Buzz Machine is at Full Throttle!“).

Recently, for example, Boehringer Ingelheim (BI) was chastised by the British Prescription Medicines Code of Practice Authority (PMCPA) for distributing a press release and briefing material for spokespersons that would in effect encourage members of the public to ask their health professional to prescribe a specific prescription only medicine. In fact, several news articles went even further and made some great marketing statements that BI could never make, such as referring to Pradaxa as a “super pill” and a “revolutionary drug.” The stories also dissed the competition (warfarin) by referring to it as “rat poison” (see “BI Masters the Art of WOM through Its “Parrots,” er, Spokespersons“).

These are news stories about pharma products and not about the pharmaceutical industry itself, which is what Rich was focused on. Getting media to publish positive stories about products is very important to pharmaceutical companies. As for stories about the industry itself, well that’s why they have the PhRMA trade association, which counterbalances negative stories in the press and competes with news media to influence lawmakers. They have a tremendous budget and the industry shouldn’t worry too much about the sort of “bad press” Rich is talking about, IMHO.

In his post, Rich included a graphic image that depicts a TV “spoon feeding” a man sitting in front of the TV with a dazed look. I modified that image to depict how the pharmaceutical industry “spoon feeds” the media as evidenced in the PMCPA/BI case. I call it “Media as Middleman” or “Pharma Feeds Media Feeds Consumers.”

Left out of this chain of influence are the Key Opinion Leaders who act as additional “middlemen” and put some further distance between pharma and the media, allowing for “plausible denial” – again as evidenced in the PMCPA/BI case.

Some time ago, I hosted the survey “How to Earn Back the Public’s Trust,” which asked respondents if they agreed that the media is the main culprit for pharma’s bad public image because news media report mostly bad news about the industry and not the good that it does. Obviously, Rich Meyer agrees with this statement. However, only 51% of my survey respondents agreed strongly or somewhat (63% of pharma respondents agreed). While that was a majority, even more respondents agreed that other issues are at fault: such as “lack of transparency regarding negative clinical data” (81% agree) and “high costs of prescription drugs” (81% agree). See a more detailed analysis of this survey here.

Meanwhile, in an FCC Journalism Report, “complaints abound from seasoned reporters who lament the growth of ‘press release reporting’ and the lack of time they have to check out the veracity of information contained in a press release. Twenty eight percent of health reporters said that they personally get story ideas from public relations firms or marketing outreach somewhat or very often” (see “New FCC Journalism Report Paints Bleak Picture of Health Coverage“). A March 2009 Survey of American Health Care Journalists (AHCJ) found that just under half (44%) of staff journalists participating in the survey say that their organization sometimes (34%) or frequently (10%) bases stories on news releases without substantial additional reporting (see “Academics Exaggerate, Journalists Regurgitate. What About Bloggers?“).

IMHO, this is “bad journalism,” but of a type that tends to paint a more rosy picture of the pharmaceutical industry and the good it does.

Reporting Gifts to Physicians — on this I Agree