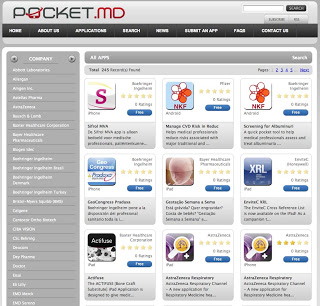 At this year’s ePharma Summit in New York, I spent a lot of time listening to presentations about pharma mobile apps. There was, for example, a session entitled “I Wish I’d Done That! Mobile” during which panel members reviewed mobile applications they liked but that were produced by rival pharma companies. Surprisingly, although at least one panel member — Jason Appel, Director, Physician Relationship Marketing, Amgen — was involved in creating mobile apps for physicians, only consumer-oriented apps were featured.

Appel said he hasn’t seen any mobile physician apps that he wished he had done and agreed with a previous presenter that most were a waste of money. But of the literally hundreds of apps created by pharmaceutical companies, many are for healthcare professionals.

My friend @skypen (Fabio Gratton) has created a web site to keep track of them all — it’s called POCKET.MD. Fabio claims it is “the world’s first and only free online service focused exclusively on providing the most comprehensive directory of mobile applications created by healthcare companies for medical professionals, patients, caregivers, and consumers.” Here’s a screen shot (click on it for an enlarged view): 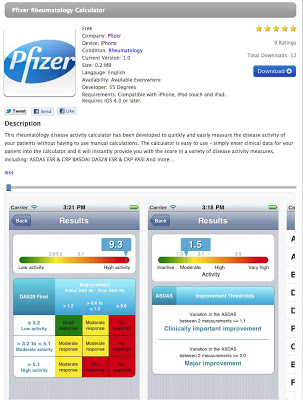 Unfortunately, this free Pfizer app is no longer available — it had to be recalled because of “a bug in the app … gives wrong results” (see “Pfizer recalls Rheumatology Calculator smartphone App“).

Back in July, 2011, I warned that bugs in such apps could go un-noticed because there is no independent verification of the software — no “Good App Seal of Approval” and certainly no FDA approval. See “Checking Under the Hood of Pharma Mobile Apps” where I point out this shortcoming in another PASI calculator mobile app.

But how do you recall a smartphone app? You can remove the app from the app stores around the world, which is what Pfizer did, but that only prevents new downloads. Most apps are downloaded to smartphones and it is not possible for the developer to remove these copies of the app from the phones. The users must do that. Considering that the “recalled” Pfizer app was the most downloaded app tracked by POCKET.MD, there must be many many users (physicians) out there who still have the app on their phones. Did Pfizer send these physicians a “Dear Doctor” letter informing them of the problem and advising them to remove the app from their phones? Probably not. Did the app include a disclaimer that protects Pfizer from being responsible for misdiagnoses due to its buggy app? Probably yes.