Pfizer’s failure to launch torcetrapib will have repercussions throughout the industry on many different levels. As a seminal event, it will rival the withdrawal of Vioxx from the market.

First, it is “devastating to Pfizer” whose executives bet big on torcetrapib as a replacement for Lipitor, which will go off patent in 2010.

Pfizer Chief Executive Jeffrey Kindler believed that torcetrapib was “one of the most important developments in our generation” and Pfizer research president John LaMattina said, “We believe this is the most important new development in cardiovascular medicine in years.” (See, for example, “Demise of a Blockbuster Drug Complicates Pfizer’s Revamp“.)

Pfizer Psyche Shaken
These executives as well as every Pfizer employee must be in shock and awe. Shocked that their company could fail so publicly and awed by the power of the butterfly effect that a rise in a few millimeters of mercury of blood pressure can have.

The failure of torcetrapib not only affects the psyche of Pfizer, but also its people, more of whom are now likely to be out of work on top of the previously announced 20% cut.

While Mr. Kindler says he is “relentlessly focused on shareholder value,” some $20 billion of it evaporated on Monday, according to the Wall Street Journal. That makes the $800 million Pfizer claims to have spent on development costs look like a rounding error, as one member of the online Pharma Marketing Discussion Board quipped.

Door Opens for Real Snakes
The visible failure of Pfizer’s prize replacement for Lipitor may also be sending a chill through the public, which could be losing confidence in Lipitor and other lipid-fighting drugs despite the lack of any supporting scientific evidence.

For proof of this, I cite the new anti-cholesterol spam emails I have been receiving lately touting cholesterol “breakthroughs”, such as the following: 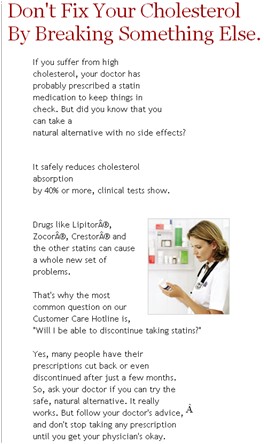 Receiving this email at this time may have been a coincidence, but as a believer in the opportunistic nature of marketers, I think not.

“Drugs like Lipitor®, Zocor®, Crestor® and the other statins can cause a whole new set of problems,” claims this ad. “So, ask your doctor if you can try the safe, natural alternative. It really works” (read between the lines: “It really works, unlike torcetrapib, the replacement drug for Lipitor, which has its own set of problems.”)

At least this ad urges readers to “follow your doctor’s advice, and don’t stop taking any prescription until you get your physician’s okay.” Others may not be so finicky.

Drug Development Without Medical Science Foundation
Torcetrapib problems may have resulted from raising the level of “bad” HDL. If so, that would signal trouble for the entire class of CETP inhibitors. “The whole class goes down at that point,” said Steven Nissen, chief of cardiovascular medicine at the Cleveland Clinic.

Finally, the torcetrapib failure puts a monkey wrench into the ascendancy of commercialization over science. Some experts claim that, like it or not, “we are in an era where development of “successful” drugs is going to be shaped by potential marketplace success” rather than clinical efficacy (according to an expert quoted in the upcoming December issue of Pharma Marketing News).

Torcetrapib may have been one of these drugs shaped more by commercial potential–ie, blockbuster potential–than by any viable science to back it up.

A recent article by an assistant managing editor at The Wall Street Journal (“Drug’s Demise Demonstrates Why CEO Is Pushing to ‘Transform’ Pfizer“) questions this strategy and suggests that Pfizer and the rest of the pharmaceutical industry needs to change its “creaky traditions,” including how it develops drugs, sells drugs, and manages public opinion. Here’s his words on that:

“That leads to the first transformation Mr. Kindler needs to make: a transformation in the way Pfizer develops drugs. Instead of one big blockbuster, it’s probably going to have to figure out a way to nurture a large number of smaller hits to keep growing.

“And then there’s the transformation needed in the way Pfizer sells drugs. The sales effort relies heavily on a huge and costly sales force that has often consisted of attractive females whose first job is to get in the doctor’s door so they can make their pitch. Mr. Kindler has already announced plans to shed 2,200 members of that sales force, and more cuts are likely.

“Finally there’s the transformation in the way Pfizer deals with politicians and a public upset about the high cost of drugs. In the past, the company’s approach has been to buy the former and ignore the latter. But that strategy is clearly fraying, and the threat of price controls, in one form or another, hovers on the horizon.”

Lilly Cymbalta Marketers are NOT Practicing What Lilly Executives Preach!