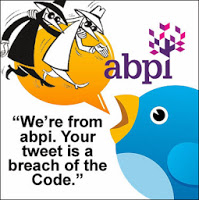 An ex-employee of Gedeon Richter, which is the largest biotechnology and pharmaceutical company based in Hungary, complained to the Prescription Medicines Code of Practice Authority (PMCPA) — the policing arm of the Association of the British Pharmaceutical Industry (ABPI) — about two tweets sent by an events company engaged by Gedeon Richter.

The first tweet, which was sent on 9 November 2012, read “Register for the event ‘Sharing surgical experience after the use of ulipristal acetate in fibroid patients'”. The second tweet, sent on 22 November 2012, read “Places available at the Nottingham symposium on uterine fibroids.”

PMCPA deemed that only one of these tweets violated the ABPI Code of Practice. Can you guess which one?

This is interesting for several reasons.

First, the tweet was not made directly by Gedeon Richter, but by an agency working on behalf of the company, which claimed that the tweets were sent without its knowledge or authority.

That excuse didn’t wash with the Authority, who noted “It was an established principle under the Code that pharmaceutical companies were responsible for work undertaken by third parties on their behalf.”

Second, the brand name — Esmya — wasn’t mentioned in the tweet, just the scientific name. In its defense, Gedeon Richter noted that another formulation of ulipristal acetate at a different dosage was an entirely different medicine marketed by another manufacturer for a different indication. Gedeon Richter submitted that given the lack of therapeutic indication or any claim, the tweet did not promote a prescription only medicine. That defense didn’t sway the Authority either.

I wonder if a similar tweet were made about a drug approved for marketing in the U.S. would be cited by the FDA as violating its regulations regarding Rx marketing? FDA’s regulations specifically concern labeling; i.e., branded information.

The Authority was too social media savvy to buy that argument: “the Panel noted that the nature of twitter was such that tweets could be broadly and quickly disseminated making them available in the public domain and so in that regard the Panel considered that a prescription only medicine had been advertised to the public.”

Some time ago, Allergan was not found responsible for a tweet made by one its employees because Allergan had a policy that clearly stated “no Allergan employee might comment in a social media forum about Allergan products or business activity” (read Allergan “Badly Let Down” by Employee Tweet).

You can find the details of the PMCPA case against Gedeon Richter attached to this post.