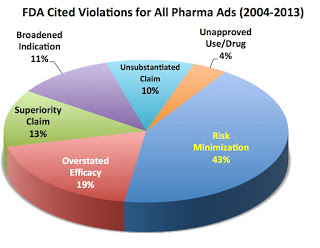 False and misleading drug ads can harm consumers and the healthcare system. In order to limit the harm from false Rx drug advertising, FDA’s Office of Prescription Drug Promotion (OPDP) tracks several kinds of regulatory violations such as:

According EyeonFDA, which has compiled data from FDA Warning and Notice of Violation Letters since 2004, “omission” or “minimization” of risk information is by far the most commonly-cited violation (see chart).
This applies to FDA-regulated branded pharma ads, but what about unbranded “disease awareness” ads, which are NOT regulated by the FDA* (see P.P.S.)? When these ads mention the benefits of “drug treatments,” should they also mention risks of these treatments and/or life-style changes like branded ads are required to do?
That’s what Dr. Aaron Kesselheim, Assistant Professor of Medicine, Brigham and Women’s Hospital, recommended in an interview with Alan Schwarz, National Correspondent who wrote a scathing Exposé of ADHD Drug Marketing in the New York Times (here).

Dr. Kesselheim was reviewing a video of an ADHD disease awareness video that said that the American Academy pediatric guidelines recommends “stimulant medications” to treat ADHD and cited that these medications were safe. Here’s an audio snippet from the video included in the article in which Schwarz and Kesselheim discuss this type of advertising:

Of course, this is not something FDA regulates. The FTC also does not regulate these ads unless they are for over-the-counter medications.

In any case, the issue is not the truthfulness of these ads — most probably state verifiable facts based on the best available science. Kesselheim, who specializes in pharmaceutical ethics, thinks these ads are misleading. Are they?

It all depends on how you define “misleading.”

One class of unbranded “disease awareness” promotion that I believe is misleading are the campaigns that urge consumers to “Take A Quiz” and find out if they have a condition that needs to be treated.

Shire has such a campaign for Adult ADHD called “Own Your ADHD” in which celebrities like Maroon 5 musician Adam Levine urge consumers to take a quiz that is based on an “ADHD Self-Report Scale Symptom Checklist.” 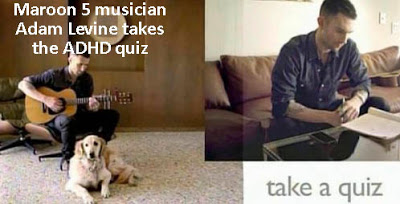 I haven’t taken this quiz yet, but I’ve rarely taken an online pharma-sponsored “symptom quiz” that ended well. Most of the time I’m told to go see my doctor because I may have X (see, for example, “OMG! Do I Have ED or ‘Low T?’ Or Both?! Pharma Symptom Quizzes Are NOT in the Best Interest of Patient Health!“).

P.S. I just scored 15 on Shire’s ADHD quiz. I’m told any score above 13 means “ADHD May Be Likely” and patients who have answered “similarly” to me have “sought professional treatment” for this “disorder.”

The language is carefully-crafted and does not specify exactly what kind of “treatment” other people have sought. I guess I’;; fill out the “Ready to Take Action” form and get a copy of my “ADHD Action Guide.” That might be more specific about my treatment options. Later.

Pharma Planet of the Apes!