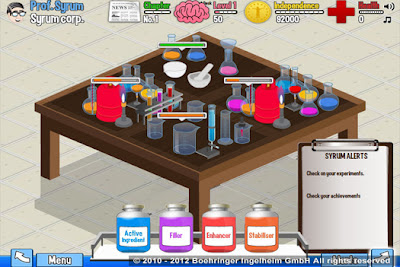 John Pugh, Director of Digital for Boehringer Ingelheim GmbH (BI), announced that BI will release a BETA version of the FaceBook game SYRUM at a PSFK conference in London on September 13, 2012.

I have been anxiously awaiting the launch of this game after I first heard about it 10 months ago at a pharma industry conference (see “Pharma & Fun, Not Oxymoronic? Here Comes Gamification!” and “BI’s Facebook Game Syrum to be Launched ‘When It’s Ready’“). At least BI is speedier than the FDA in delivering on long-awaited promises!

I have not heard of the PSFK conferences until now. According to its website, PSFK “conferences offer a diverse program of speakers with backgrounds in art, technology, design, marketing, and media, creating an environment where disparate ideas can come together in new ways to fuel work that changes the world for the better. We set an agenda that allows participants to meet and discuss with one another, together sharing and building upon the ideas brought forth from the stage.”

I am a bit surprised, however, that Pugh/BI did not choose to launch SYRUM at a pharma industry conference such as DigiPharm Europe, which will take place less than a fortnight later, also in London. Over the past year, Pugh has been making the rounds at such industry conferences promoting SYRUM. I’m not one to speculate (ha ha), but is Pugh getting ready to move on to greener pastures in another, more “innovative” industry? To be fair, it’s important for pharma company employees to make connections with like-minded people in other industries to get new ideas that may be applied to pharma.

In any case, here’s some of what Pugh revealed to PSFK (read the full interview here):

“We are taking a Silicon Valley approach,” said Pugh, “where we know we have got a really good game that’s stable but we’ll launch a beta version. We really want to make it so that we get lots of feedback from the people who are playing.”

“We’re offering rewards and prizes for people to give feedback so that we can really create the duration of the game, and develop it, and have more of a crowdsourced collaborative effort to develop the future stages of it, so the game will grow and evolve, as more people play it. This is a very unique offering from a highly regulated industry.”

Meanwhile, here’s a first glimpse of actual SYRUM game screens – previously, we’ve only been able to see the opening screen with the message “coming soon.” 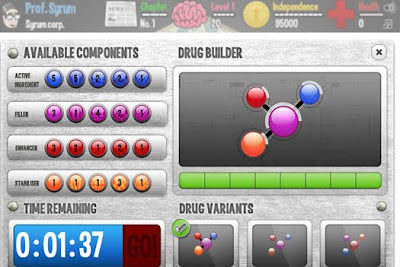