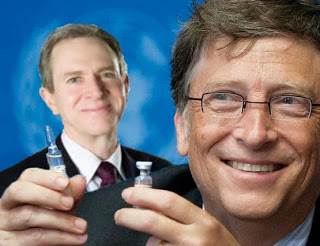 Steve Jobs successfully recruited John Scully to head up Apple in 1983 by making this legendary pitch to Scully:

“Do you want to sell sugared water for the rest of your life? Or do you want to come with me and change the world?”

Did Bill Gates make a similar pitch to lure Trevor Mundel away from Novartis to be President of Global Health at the Bill and Melinda Gates Foundation?

Mundel was not enjoying his role as Novartis’ Global Head of Development in 2011 when he went over to the “light side” of philanthropy as opposed to remaining on the “dark side” of capitalistic pharma.

At Novartis Mundel admits there was a “huge focus in moving towards rare diseases… [which] from a regulatory viewpoint… were much less expensive — they might be accelerated” (read “The Gates Foundation’s Trevor Mundel on Rallying Pharma to Do Good“).

Mundel was referring to FDA’s program of accelerated approval of drugs to treat rare (“orphan”) diseases (see here). Given that incentive and the high prices orphan disease drugs command, it is understandable why pharma is channeling “Willy Sutton”; i.e., going where the money is (read “New Big Pharma Economies of Scale: Less Patients Needed to Reach Blockbuster Sales“)

Mundel described the moment of truth when I imagine Gates made his pitch:

“So I’m looking at an industry that’s facing pricing pressures, rarer diseases, stratifying populations, and massive resources in the area of oncology,” says Mundel. “It was very much focused on the diseases of the developed world. And then I saw what a small group can do to have a massive impact on a miniscule, shoestring budget by comparison.”

“You have to think about where you want to go. I always thought I’d want to go back to Africa and do some work over there, having grown up in South Africa. With those thoughts in mind, the Gates opportunity came up. At that point, you have to decide, are you going to jump in or just say ‘Oh, I’ll do that one day.’”

That’s when I imagine Gates made his pitch: “Do you want to sell drugs for rare diseases for the rest of your life, or do you want to come with me and change the world?”

At the Gates Foundation, Mundel “oversees a vast global health grant portfolio that seeks to combat diarrheal infections, HIV, tuberculosis, malaria, and many other illnesses that the global capitalist system has largely ignored,” says Xcomony’s Luke Timmerman (here). The Gates Foundation, “started by a titan of capitalism, understands that if it’s going to make any kind of dent in these huge health problems, it needs to tap into the resources of pharma and biotech.” That’s Mundel’s job.

Will Mundel be successful in bringing more pharma money and resources to solve the NON-rare diseases of the developing world? Or, like Scully, will he fail miserably working in a strange new world?

Should Pharma Do Tumblr?