Occasionally, mainstream media reporters call me for my opinion on the marketing of drugs.

Several days ago I received a call from Nastasha Singer, a New York Times reporter. She interviewed me for a story published today in the Business section of the Sunday Times about the marketing of testosterone drugs. The title of that story is “Selling That New-Man Feeling.”

The Times article featured a man named Mike who “suspected that diminished testosterone was the cause of his lethargy. And he hoped, as the marketing campaigns seem to suggest, that taking a prescription testosterone drug would make him feel more energetic.”

My comments focused on the Low-T symptom quizzes sponsored by Abbvie, which markets AndroGel:

‘You might not have the medical condition as described in the textbook,’ Mr. Mack explains. ‘But you may have low T as defined by marketing quizzes, and you go to the doctor and ask for treatment.'”

The article nicely covers the use of such quizzes and the ties between physicians like Mike’s doctor and the drug industry. Here’s a excerpt from the article:

“I took your advice and I went and got my testosterone checked,” Mike told Dr. Fisch. Mike’s own physician, he related, told him that his testosterone “was a little low” and prescribed a testosterone medication.

Mike also said he had diabetes and high blood pressure and was 40 pounds overweight. Dr. Fisch explained that conditions like obesity might be accompanied by decreased testosterone and energy, and he urged Mike to exercise more and to lose weight. But if Mike had trouble overhauling his diet and exercise habits, Dr. Fisch said, taking testosterone might give him the boost he needed to do so.

“If it gives you more energy to exercise,” Dr. Fisch said of the testosterone drug, “I’m all for it.”

Recommendations like Dr. Fisch’s and the marketing of low T as a common medical condition helped propel sales of testosterone gels, patches, injections and tablets to about $2 billion in the United States last year, according to IMS Health, a health care information company. In 2002, sales were reported to be a mere $324 million; around that time, Solvay Pharmaceuticals, which was then marketing AndroGel, began using the term “low T,” replacing a previous euphemism for male aging, “andropause.” Today the low-T trend is global. From 2000 to 2011, there was “a major and progressive increase” in testosterone use in 37 countries, according to a recent study published in the Medical Journal of Australia.

This marketing juggernaut is running into mounting opposition from some prominent medical researchers and industry experts. They contend that the pharmaceutical industry has vastly expanded the market for testosterone drugs to many men who may not need them and may be exposed to increased health risks by taking them. And drug makers have done so, these critics say, by exploiting loopholes in federal marketing regulations.

Drug makers spent $107 million last year to advertise the top brand-name testosterone drugs in the United States, according to Kantar Media. That amount doesn’t include marketing known as unbranded campaigns, which raise awareness of low T itself. The Food and Drug Administration closely regulates advertisements for brand-name prescription drugs, but does not generally regulate unbranded campaigns. That two-track system, says John Mack, an analyst who runs a blog called Pharma Marketing, has enabled companies to position low T as a malady with such amorphous symptoms — listlessness, increased body fat and moodiness — that it can be seen to afflict nearly all men, at least once in a while. Drug makers also promote low-T screening quizzes directly to consumers, Mr. Mack says, in an effort to prompt men to seek testosterone prescriptions from their doctors.

“You might not have the medical condition as described in the textbook,” Mr. Mack explains. “But you may have low T as defined by marketing quizzes, and you go to the doctor and ask for treatment.”

“The impression one gets reading articles such as this is the only reason men want to treat low testosterone is to desperately regain the sex drive of youth, and the only reason physicians prescribe them is they are hapless victims of advertising.
Somewhere along the way, we lost track of the simple fact that testosterone deficiency is a real condition and that there is a legitimate need to treat it. The DC-based non-profit, Men’s Health Network, believes that the prevailing cynical narrative is fueled by ageism and sexism and does a disservice to men and their families by ignoring established and evolving evidence supporting the proper use of testosterone therapy. Replacement of low testosterone has important protective effects on men’s global-cardiovascular and metabolic health. It’s is also unethical to deny men the opportunity to make informed decisions about their health by denying them access to treatments that could improve the quality of and perhaps even save their life. There is irrefutable evidence that maintaining a sex-life at any age has many benefits for both partners.
Medically supervised hormone replacement therapy for men and women is not without risks; but the same is true of 30,000+ other Rx medications. It’s true we don’t know everything about the side effects of these medications, but the same is true of hundreds of medical products commonly used and this is not a reason to dismiss their use.”

Although Dr. Giorgianni tries to deflect the discussion away from the topic of sex, the Low-T quiz featured on the MHN Web site indicates that if you answered “yes” to the last 2 questions (“Do you have a decrease in libido (low sex drive)” and “Are your erections less strong”), then “you may have low testosterone.” 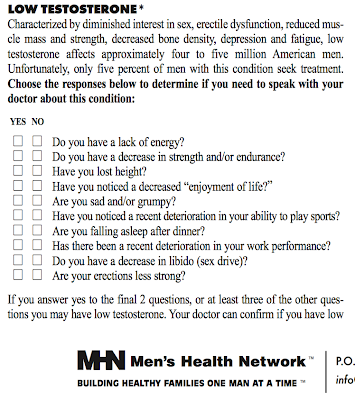 MHN is also proud of its “Tune-Up Your T” campaign, which features race car imagery. The site (here) does not mention if AbbVie sponsors this campaign, but the driving imagery uses the same metaphor as AbbVie’s Drive For Five campaign, which is featured on MHN’s web site. Dr. Giogianni should have mentioned MHN’s close connection to AbbVie in his comments. Just sayin’