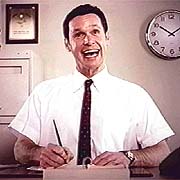 Erectile dysfuntion (ED) drugs — Viagra, Cialis, Levitra — are in the news again. It seems that ED drug marketers have retooled their campaigns after another disappointing year for sales in this category overall.

Some Numbers
Here’s a tidbit from the NY Daily News (see “Taking clinical tact in new ED drug ads“; What? Did you think I only read the WSJ and the NYT?):

“Revenues have fallen short of expectations and growth was flat last year as two of the drugs makers cut back on ad spending while revising their messages. Last year, the U.S. market for the drugs was flat at $1.4 billion, according to IMS Health. Viagra’s total sales slumped 2% last year to $1.6 billion after falling 11% in 2004. Last year, total spending on advertising for erectile dysfunction ads fell 41% to $241 million, according to TNS Media Intelligence. Much of the drop can be attributed to a lack of Viagra TV ads and only half a year of commercials for Levitra.”

Cialis, marketed by Lilly/ICOS, on the other hand, has taken up the slack: Worldwide sales of Cialis reached $747 million in global sales last year, a 35% jump from 2004. (The Total WORLDWIDE sales of ED drugs is said to be about $3 billion.)

Conventional wisdom regarding the pullback in ED drug advertising says it was a result of PhRMA’s new DTC guidelines. However, it appears that the marketers have merely regrouped around two core, inter-related messages:

Levitra may be taking the lead on the first core message. Some time ago it launched it’s “Mens Facts” campaign and Web site. Now, it has launched the Check Men’s Facts educational campaign and a new national survey. [The Levitra folks seem to have reserved all the generic “Men’s Facts” domain names, really pushing the Immutable Laws of DTC Domain Naming to the limit!]

The Check Men’s Facts Web site begins by congering up some big market numbers as in:

I think these are US numbers.

These medical conditions, the site warns, “could affect your erections.” They don’t say which way, but you get the point. Some fact.

Videos of physicians on the site ram the scary case home. Randall B. Meacham, MD, for example, has this to say about hypertension and ED:

“Over 29 million in the US have high blood pressure… Two out of three men with this condition, even when controlled by medication, experience changes in erections.” [Emphasis added]

Note the careful language — no “facts” about the degree of ED, what exactly the changes are, what exactly the risks are, etc. Randall also mentions that “80%” of men with ED suffer from one of the three medical conditions mentioned as if that applied the other way around as well; ie, that 80% of men with CV issues are at risk for ED. Those numbers are enough to give any ED marketer a hard one!

Here I am, a man over 40 doing all I can to control my HT with medication, and STILL I am at risk for ED! What am I to do? Get ready for the once-a-day ED pill, silly!

The Once-a-Day Shoe
The first shoe has been dropped: ED is a medical condition associated with three major cardiosvascular medical conditions. Now, we really are seeing the “other shoe” being dropped.

According to ICOS CEO Paul Clark, Lilly/ICOS is targeting men in their forties and fifties who use erectile dysfunction drugs on a ‘more frequently than average’ basis with a once-a-day version of its Cialis (tadalfil) treatment. It plans later this year to ask the Food and Drug Administration for approval of a once-daily version of the medicine. In May, Icos applied to European drug regulators for approval of the once-daily pill (see “A Daily Pill to Combat Impotence?,” New York Times; OK. I do read the NYT also!).

Blockbuster BallBuster
This could raise worldwide sales of Cialis by as much as 32% (an increase of $200 to $250 million over and above the current $776 million in sales), making Cialis an official “blockbuster” drug — not to mention “ballbuster” if men actually took daily advantage of the benefits!

Will Once-a-Day Cialis require a new generic name? If so, what names could FDA and Lilly/ICOS be considering? Ballbustamakin? You guys out there with a better grasp of Latin may be able to come up better candidates.