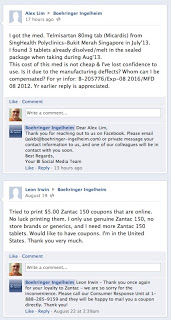 Boehringer Ingelheim (BI) – the German pharma company with the famously difficult-for-nonGermans-to-pronounce name (see “BI’s Famously Buxom and Unpronounceable YouTube Video“) – just posted a video on YouTube expressing thanks for the 50,000 people who have “liked” its Facebook page. Actually, there are over 58,000 likes as of today.

The video features Allan Hillgrove, who was recently elected to BI’s Board of Managing Directors, Division of Pharma Marketing and Sales. Unfortunately, I cannot find Mr. Hillgrove’s LinkedIn page or Twitter account. Maybe he’s one of those pharma C-level executives who have not previously (or currently) “carried the digital/social media bag” that I wrote about recently in Pharma Marketing News (see “Pharma C-Suite Social Media Dummies“). In any case, it’s nice that he is thankful for the likes.

“Something has been cooking in the Social Media Lab here at Boehringer Ingelheim,” says Hillgrove.
“Boehringer Ingelheim has been working hard to come up with a way to say THANK YOU for our over 50,000 Likes! We hope you enjoy this video we put together just for YOU!”

So far, this video has been viewed 11 times (I have viewed it about 3 times). BI’s Youtube channel has only about 1,100 subscribers in contrast to the 58,000 FB page likes.

More important than likes, however, is the fact that pharma companies are now getting comfortable with comments on their Facebook pages and are actually engaging in real conversations with the people who “like” them. This is in contrast to how the industry first greeted the news that Facebook would no longer allow comments to be shut off. That was two years ago.

Take a look at some of the comments from “others” and responses by BI on its FB page (see left; click on the image for an enlarged view).

Of course, BI has a policy regarding how it handles comments:

“Boehringer Ingelheim does not represent or endorse users’ comments and posts on this wall, except those we post here of course!

“The company reserves the right to remove any postings at its sole discretion (we work with serious medical conditions and we can’t risk unmonitored or unverified medical advice being published).

“These pages are not intended as a forum to discuss technical queries regarding specific pharmaceutical products, medical conditions or as a substitute for professional medical advice. We know a lot of doctors and trust us – they know about health!”

Back in March, 2012, Janssen Pharmaceuticals — a division of Johnson and Johnson — shut down its Psoriasis 360 Facebook page because “we have found ourselves removing a larger and larger proportion of posts, stifling worthwhile discussions” (see “Janssen to Shut Down Psoriasis 360 FaceBook Page Due to Lack of Commitment“).

You — by which I mean the pharmaceutical industry — have indeed come a long way, baby!

Nobody Knows You’re a Fake Patient on the Internet!