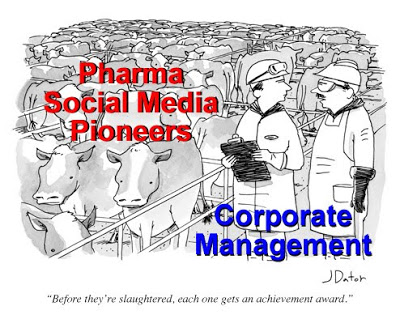 Now that the 4th Annual Pharmaguy Social Media Pioneer Award winner will soon be announced, it’s a good time to review who won the awards in 2010, 2011, and 2012 and learn more about what they are doing today. Here’s the SlideShare presentation:

You will notice that two of the three past winners are no longer working inside pharma.

Alex Butler, who won the Award in 2010, is now an independent consultant, TEDMed speaker and successful social media maven having over 76,000 followers on Twitter. He is still “focused on supporting the pharmaceutical industry,” however.

Tony Jewell, who won the Award in 2011, founded Boardwalk Public Relations, which “will work with you every step of the way in building, enhancing and protecting your reputation while seizing the opportunity to advocate for policies that allow your business or organization to thrive.” Using social media to protect business reputation is like using fire to prevent fire – it can be effective, but also risks creating a bigger fire depending on how the winds shift. Tony no longer focuses exclusively on the pharma industry. I wish Tony luck.

The Sanofi US Diabetes Team (Dennis Urbaniak, Joan Mikardos, and Laura Kolodjesji), who won the Award in 2013, are still at it, demonstrating a rare long-term commitment to their online community.

What will be the fate of the NEXT winner of the Pharmaguy Social Media Pioneer Award? I hope it’s NOT this: