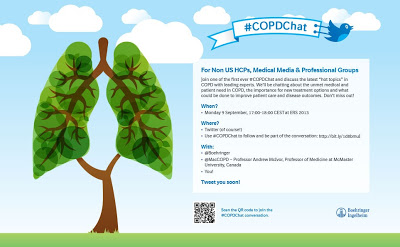 Two-and-one-half years after AstraZeneca hosted the First-Ever pharma Twitter chat (see “OMG! AstraZeneca Hosts Twitter Chat & World Does NOT End!“), Boehringer Ingelheim (BI) has announced that it will host a #COPDChat Tweet Chat at European Respiratory Society (ERS) 2013 Congress, Mon 9 Sept @ 5pm CEST. BI registered the #COPDChat hashtag with Symphur just a week or so ago. This, however, was not the first use of the #COPDChat hashtag.

I first suggested that BI host a #COPDChat back in November, 2010:

“It appears to me that a pharma-hosted Twitter chat about a disease condition would be of high interest to consumers and patients. Boehringer Ingelhiem (BI), for example, could host a COPD Twitter chat in conjunction with its DRIVE4COPD campaign. BI has a DRIVE4COPD Twitter account (@DRIVE4COPD) and has used the #4COPD hashtag (infrequently), but I haven’t seen any regularly-scheduled chat (eg, #COPDChat).” Read more about this here: “Will a Pharma Company Ever ‘Host’ a Chat on Twitter?“

I am happy that they finally took my advice 🙂

[Actually, this is not technically the FIRST disease condition TweetChat hosted by pharma. BI also hosted #ChatAFib, a live TweetChat event which took place on 2 September 2013 during #ESCCongress2013. The participants discussed cardiovascular disease and thrombosis in women. Find a transcript of this chat attached here.]

Only 6 tweets have ever been made so far (as of 7:00 AM US this morning) that include the #COPDChat hashtag and I was the first to use it on 10 November 2010. That tweet included a link to the blog post above. (See Twitter search screen below; click for an enlarged view). 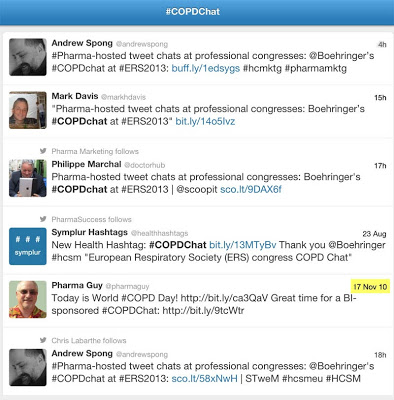 You can follow the #COPDChat via BI’s “NewsHome” page dedicated to the chat here. The invitation states: “Join us for one of the first ever #COPDChat Tweet Chat live from the European Respiratory Society 2013 annual congress (#ERS2013) on Monday 9 September at 5pm CEST and discuss the latest ‘hot topics’ in #COPD with leading experts. We’ll be chatting about the role of dual bronchodilation in COPD, discussing whether there is a need for new treatment options and whether digital COPD tools can improve patient care and disease outcomes. Don’t miss out!”

The NewsHome website “is intended for journalists or healthcare professionals outside the US/UK who are interested in media information from Boehringer Ingelheim.” OK, but anyone in the world can access the site or use Twitter itself to follow and participate in the chat.

I am not sure what regulations apply to non-UK/US pharma-hosted chats such as #COPDChat, but there are several non-regulatory reasons why pharma companies have not hosted more chats:

AstraZeneca’s groundbreaking #RxSave Twitter chat demonstrated that a pharma company can manage a successful Twitter chat for consumers/patients despite the challenges listed above. It was for that reason that Tony Jewell, who at the time was Senior Director of External Communications AZ, was awarded the second Pharmaguy Social Media Pioneer Award (see here).

The #COPDChat is intended for physicians and the news media. It is NOT intended for patients and consumers, although there is no way that the general public can be excluded. Therefore, it seems to me that BI has to assume consumers will be at least “lurking” and may also be posting. The self-regulatory code of the Association of the British Pharmaceutical Industry (ABPI) specifically prohibits Twitter chats even when “intended” for physicians only. The code states:

“If a company wanted to promote a medicine via twitter it would have to ensure that if the medicine was prescription only, the audience was restricted to health professionals and that the message, in addition to any link to further information, complied with the Code. In addition companies would also have to ensure that recipients had agreed to receive the information. Given these restrictions and the character limit on twitter, it is highly unlikely that the use of this medium to promote prescription only medicines would meet the requirements of the Code. Using twitter to alert health professionals about the publication of a study on a medicine is likely to be considered promotion of that medicine.”

BI is a member of the ABPI, hence the reason for its disclaimer that #COPDChat is not intended for a UK audience. It remains to be seen, however, if such disclaimers carry weight with the UK’s Prescription Medicines Code of Practice Authority (PMCPA), which oversees ABPI’s self-regulatory code.

I am not sure who at BI is responsible for the Twitter COPD account and #COPDChat (see BI’s comment to this post for the answer). There are several people I know who may be involved, including Faith Busch (@faithandcomm), John Pugh (@JohnPugh), and Judith von Gordon. I have added these names to my “Who is a Pharma Social Media Pioneer?” survey, which helps me determine who should be the recipient of the Fourth Annual Pharmaguy Social Media Award

Meanwhile, you can listen to my podcast interview of John Pugh and Judith von Gordon: “Pharma on Twitter: Boehringer Ingelheim“

You Might Be A Pharma Social Media Pioneer If…