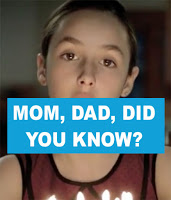 When STATnews reporter Rebecca Robbins (@rebeccadrobbins) interviewed me about what’s behind ominous unbranded “disease awareness” ads, I opined that if you’re a drug maker, “you don’t want to attach a dark image to the brand — so you’re attaching this dark imagery to a medical condition instead,” which leaves room for a branded ad that shows “the bright side: that there’s this product that can save the day” (Read “#Pharma ‘Disease Awareness’ Ads: Are They ‘Stealthy’ Fear Mongering Set Pieces?“).

That “conventional wisdom” or “rule” — if it is one — obviously does NOT apply to many ads for vaccines, especially lately. Take, for example, the TV ad for Trumenba – Pfizer’s Meningitis B vaccine. I saw this ad for the first time last night:

As described by iSpot.tv (here) the Trumenba ad “follows the series of events that lead up to this young man being in a hospital with Meningitis B. The source of the infection is traced back to a party where the teenager shared food, drinks and a kiss with friends. Trumenba offers a vaccine to prevent future spread of the disease.” Bummer! You can’t even enjoy an innocent kiss without fearing for your life! This is obviously a “dark” and scary ad aimed at the parents of teenagers for whom this vaccine is indicated (up to age 25).

Why are scare tactics the marketing strategy du jour in branded and unbranded vaccine ads?

It wasn’t always this way.

Back in 2008, when I thought the vaccine business would not be profitable for pharma (silly me! Read “Vaccines Are Path to Better Revenue Growth for Some #Pharma Companies“), I lauded Merck’s Gardasil DTC campaign. “It was effective for me, I said. “And I am sure that word of mouth will spread quickly. For me, the launch of Gardasil sent the message that Merck is a leader in the area of disease prevention, which puts people first” (read “Merck on a Roll“).

These days, when sales are lower than expected and with competing products on the market, Merck’s HPV awareness ads have become darker and put the blame on parents who don’t get their children vaccinated (read “Merck Ad Blames Parents & Asks: ‘Mom, Dad, Did You Know’“).

“I respect parents who get mad about the [ads], but they should take that pissed-off feeling and ask their doctors about vaccinating their children,” said the chairman of the American Cancer Society’s HPV Vaccination Roundtable and has also advised Merck on HPV. Biased physician says what?

Note, however, that Merck has followed the “rule” I mentioned above; i.e., leave the dark side to unbranded ads. We’ll see if it breaks that rule in future branded Gardasil ads.

And the future may be here sooner than we think. As reported in STATnews, “A new survey published in Pediatrics … reports that 87 percent of pediatricians in the United States say they encountered parents refusing to vaccinate their children in 2013. A decade earlier, 75 percent of doctors reported they had experienced vaccine refusals” (read “More Parents Refuse Vaccination for Their Kids. Why? Not the Reason You Think“).