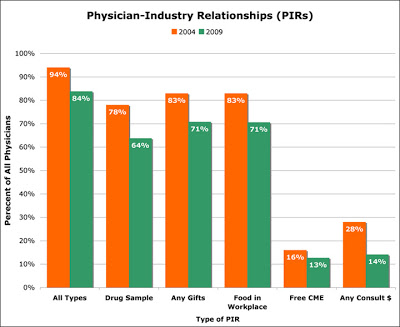 There has been some decline, however, in the percentage of physicians receiving PIRs from 2004 to 2009. “In 2004,” reports the study authors, “more than 80% of physicians reported that they received food and beverages in their workplaces and 78% received drug samples. More than one third (35%) were reimbursed by companies for costs associated with professional meetings or continuing medical education (CME), and more than one-quarter (28%) received payments for consulting, speaking, or enrolling patients in clinical trials.”

I plotted some of the more relevant survey results to more easily compare the 2009 data with data from 2004 (click for an enlarged view):

What’s immediately striking to me is sharp drop in % of physicians receiving payments for consulting, participation on speaker bureaus and advisory boards, and for enrolling patients in clinical trials. That percent decreased from 28% in 2004 to 14% in 2009 (see last group of bars in chart above). This is in contrast to modest decreases seen for other PIRs.

It can be assumed that this is due to two factors: (1) passage of the Physician Sunshine Act as part of the Healthcare reform passed last year, and (2) the increase in the number of drug companies required by legal settlements to report payments to physicians (eg, see “Drug companies paid N.J. doctors millions to promote their products“. Eventually, all pharma companies will have to report payments to physicians unless, of course, healthcare reform is repealed or scaled back by the new US Congress.

The authors of the study conclude “given that 83.8% of physicians have PIRs, it is clear that industry still has substantial financial links with the nation’s physicians. These findings support the ongoing need for a national system of disclosure of PIRs.” Such a system is part of the Physician Sunshine Law, which is scheduled to go into effect in 2013. As I said above, a national disclosure of PIRs may be among the first items on the new GOP agenda’s chopping block.

However, one other factor may be at play here: the decreasing number of new brand name drugs coming to market in last several years. While the authors cite cut backs in marketing due to the global financial crisis as a possible contributing factor, they do not mention that PIRs may be declining in part because of the depressed number of new drugs in the pipeline that require marketing to physicians.