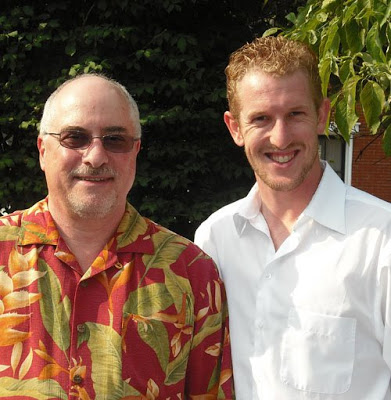 Ever since I wrote my blog post dissing the first-ever pharma branded Tweet, people have wondered if I really have it in for the pharmaceutical industry. (start here and work your way back to catch up on the story).

Seems like no matter how “mean” I am, pharma people still come up to me at meetings to say hello and invite me to wine and dine with them. They even invite me into the tent to talk to their marketing people! Imagine that!

Today, I was invited to breakfast by Ambre Morley (@ambremorley), Associate Director of Product Communications at Novo Nordisk to meet Charlie Kimball — the racecar driver and person with diabetes (PWD) who is sponsored by Novo Nordisk’s Levemir insulin brand team.

Charlie was visiting Novo just a hop, skip, and a jump from where I live and work (Newtown, PA). So, we met. Why not? That’s me and Charlie in the photo taken by Ambre just after our breakfast, which I think the restaurant deeply discounted because we were interrupted by a faulty fire alarm!

I had ordered what Charlie ordered: two eggs over easy with toast. I spread butter on my toast, Charlies favored jam. Butter is not good for my high cholesterol, but I know that PWD need to balance their sugar intake. In fact, Charlie has a special “feeder” strapped on to his helmet or seat when he races so he can drink orange juice through a tube as needed. It’s just one way that he can do what he does although he has diabetes.

I think he mentioned that once on his personal Twitter page (@CharlieKimball), but may not have on his @racewithinsulin page. Charlie says the Tweets on both sites are written by him — using his iPhone — and are NOT edited by Novo as I had previously suggested. I did mentioned that more personal Tweets on @racewithinsulin would be welcome, especially Tweets about how he deals with diabetes as a racecar driver.

Charlie depends on his sponsorships to keep his career going, just like any other racecar driver. He wants to make sure he does a good job for Novo in representing the Levemir brand. Although Novo does not tell him what to Tweet nor does Novo edited his Tweets, Charlie has been briefed on how to word his Tweets whenever he mentions a Novo branded product.

Ambre and I discussed some of the hurdles that pharmaceutical companies face when using Twitter and other social media applications. Two takeaways from that discussion were:

As for point 1, IMHO, FDA can not long hide behind the “It’s the message, not the medium” defense much longer. Clearly, there are limitations associated with Twitter that cry out for a special case just like FDA made a special case for TV ads (called the “brief summary’). I suppose, however, that it is unrealistic for FDA to carve out special exceptions for Twitter like it did for TV. Unrealistic until Twitter supports as big an economy as TV does — I don’t know anyone who makes millions producing Twitter commercials, do you?

Let’s discuss Levemir branded Tweets. Why can’t these Tweets link to useful information for PWD instead of the technical Prescribing Information (PI)?

Here’s how Novo sees it: Every branded Tweet MUST be just one-click away from the PI because the Tweet exists on the Race with Insulin page that mentions the benefit. Even though there is amble fair balance on that page, FDA expects a direct link to the PI also. Unfortunately, Twitter does not allow users to put links like that on the background. Such a capability would be one way that Twitter could help pharma. Unfortunately, when pharma explains FDA requirements to the Twits at Twitter, all they can say is “What’s an FDA?”

Anyway, thanks Ambre and Charlie for meeting with me. Hopefully, we can followup with an Pharma Marketing Talk live interview/podcast soon. Meanwhile, you can follow some more of my breakfast encounter with Charlie via Twitter by searching for the #ckbkft hashtag (or just click here).