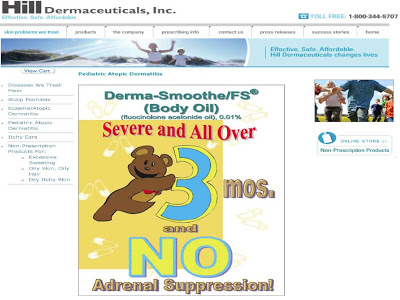 Approximately 12 minutes into yesterday’s 45-minute “Bad Ad Program Webinar,” Catherine Gray, PharmD, Management Advisor at DDMAC, got down to business and started talking about the program that some critics have said is “ineffective, not cost-effective, and biased” (see poll here). At that point, Gray talked about “Limitations” of FDA’s drug promotion surveillance. She focused on promotions to physicians.

Among FDA’s TOP three “normal” surveillance activities was “complaints submitted by industry competitors.” In fact, Gray said “we have found that industry competitors tend to be some of the best sources of information about potentially false and misleading advertising.”

I am not surprised that competitors complain to the FDA. I’ve spoken to industry people who read this blog because they like to see me blast their competitors. For example, when I speculated that Phil Mickelson was on the AMGEN/PFIZER payroll when he said glowing things about ENBREL in the press (see “Is Phil Mickelson Shilling for Enbrel?”), a competitor told me that his company wondered the same thing.

Of course, even competitors cannot hear what’s said “behind closed doors” in physician offices, industry-sponsored dinner and lunch programs, and on the floor at major medical meetings. The FDA initiated its BadAd program to “fill these gaps” in its surveillance activities. Thus, the BadAd program is designed to solicit complaints from physicians about verbal statements made by company sales reps or company-paid speakers. 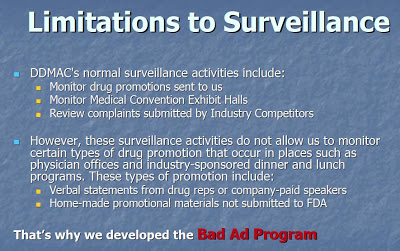 When asked “In cases where there is a complaint about an oral statement, what evidence standard do you use to go forward with an action,” an FDA speaker responded: “We have a very high level of evidence that we require that often includes an affidavit … and verification as well. So, we do have a very high … standard of evidence that we require before taking enforcement action.” No further details were given.

However, in response to another question, FDA said they also accept anonymous complaints, which obviously cannot be substantiated by an “affidavit.” FDA does not reveal how many of the 239 BadAd complaints it received in 2010 were from “anonymous” sources, but given the fact that competitors are likely to be a major source of complaints, I image that a good deal of BadAd complaints are anonymous and likely to be worthless.

Of course, some companies are just too dumb not to leave a trail of verifiable evidence, such as Hill Dermaceuticals, which had a nice public website the FDA could plainly see violated its regulations (see FDA’s Bad Ad Program is “Phoniest Thing Ever!” and screen shot below).

No wonder then that the Hill Dermaceuticals case was the ONLY BadAd complaint that resulted in a notice of violation letter. Does the FDA need a BadAd program for that? BTW, Jerry Roth, president of Hill Dermaceuticals, complained that DDMAC acted on a complaint filed by “a doctor for another [competing] company.” Mr. Roth should THANK the FDA for giving his company some GREAT promotion!

Aside from violative verbal statements, the FDA’s BadAd program is designed to capture complaints specifically about “Home-made promotional materials not submitted to FDA.”

How rampant is the use of “home-made promotional materials” by pharma sales reps? It must be significant if the FDA specifically mentions it as a reason for the BadAd program, which don’t forget, was created by “2 former sales representatives with 11 years combined selling experience.” These former reps, said Gray, “are well aware what goes on behind closed doors.” Perhaps these two former reps engaged in questionable promotion to physicians themselves? Gray added that they were “quite successful in selling their products.”

My impression of the BadAd program is that it was created by former drug industry sales professionals and is designed to make it easier for sales reps and company-paid physicians to “rat out” their competitors, anonymously or not. It just doesn’t present a good image of how a government agency should work. In fact, I am sure that under a new administration, the BadAd program will be the first item on the agenda for cutting. While it may be easy these days for a drug rep to begin a career in the FDA, I am not so sure a former drug rep FDA staffer will be able to get a job in the drug industry after being laid off due to budget cuts!