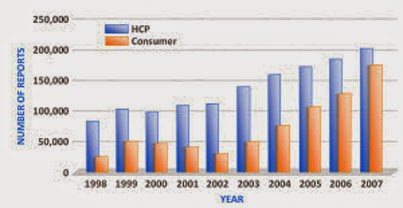 As reported by FDA News and Pharmalot, consumers are outpacing physicians in the number of drug adverse events reported to the FDA.

According to the FDA’s numbers (here), in 2007, consumers contributed about 174,000 AERs (adverse event reports) to the FDA, whereas physicians submitted exactly 121,000. Consumers have been outpacing physicians in reports submitted since 2004-2005 when the Vioxx withdrawal was big news.

But healthcare providers — which include pharmacists and “other” healthcare professionals — continue to submit many more reports than do consumers as the FDA chart below shows:

It’s interesting to note that the RATE OF INCREASE in the number of reports submitted by consumers in the years 2004 through 2007 is much higher than that for physicians and other healthcare providers, which is something that Ed Silverman at Pharmalot also points out. See chart below. “Why the shift?,” asks Silverman. “FDA News speculates that consumers may have greater awareness of safety issues. That seems to be a reasonable assumption, given the headlines over antidepressants and Vioxx in 2004, a trend that continued last year with Avandia and Chantix. However, we would point out that safety issues made headlines, albeit sporadically, in previous years in connection with other drugs.”

I would point out that after the 2004 Vioxx withdrawal, FDA made it MUCH easier for consumers to submit AERs on its Medwatch web site. That, no doubt, contributed to the rate of increase in consumer-submitted AERs.

Not All AERs are Created Equal
Of course, not all AERs are created equal — I’m pretty sure consumer-initiated AERs are not nearly as important to the FDA’s analysis as are physician-initiated AERs. I’d bet, in fact, that 1 physician AER is worth about 3 consumer AERs. I have no idea how much value FDA places on AERs submitted by pharmaceutical companies. Do you know?

P.S. Consumers really began being jazzed by AE’s starting as early as 2003 when the number of AERs submitted by consumers increase by about 60% over the previous year. Since then, the rate of increase has cooled down somewhat (except for 2007 when it shot back up a bit):