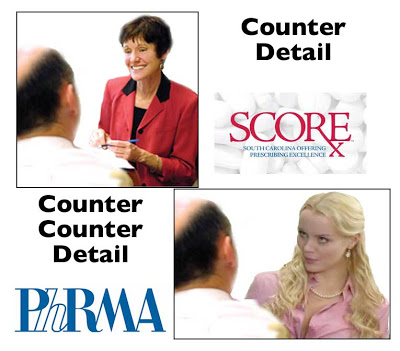 The South Carolina Medicaid Academic Detailing Program, aka SCORxE, which stands for South Carolina Offering Prescribing Excellence, was featured in a recent Time Magazine story (see “The States Take On the Drug Pitchmen“).

One scenario described in that article got me thinking about the futility of “counter-detailing.”

“…a disagreement among the leaders of the state’s SCORxE program — designed to educate physicians with unbiased and accurate information about prescription drugs. The basic issue: Should representatives of the program bring the doctors pizza for lunch? Sarah Ball, the indefatigable pharmacist who leads SCORxE, says no. The whole point of SCORxE, after all, is to counteract Big Pharma’s hard-sell drug marketing. But sometimes you have to fight fire with fire, says Dr. Robert Malcolm, a psychiatrist and adviser to SCORxE. ‘We are competing with people who bring food,’ he says.”

Yes Dr. Malcolm, the new PhRMA Code on Interactions with Healthcare Professionals does allow it is appropriate for “occasional meals to be offered as a business courtesy to the healthcare professionals as well as members of their staff attending presentations…”

But, as I pointed out many times here on this blog, pharmaceutical company sales reps have an even greater advantage: good looks!

Hmmm.. which do YOU think is more effective?

I won’t comment on “the mass of drug company sales forces,” but I agree with Ehrlich that counter detailing is too small scale for the industry to worry about (see “Counter Detailing — Pissing into the Wind or Profitable Endeavor?“).

One other comment Ehrlich made, however, deserves further comment. He said: “Clearly the state sponsored [counter-detailing] programs have a goal to reduce costs and although they say they want to provide unbiased studies to doctors, I doubt that will be the case. More likely they will find studies that show the branded drugs have marginal value.”

I did not know that there WERE studies that show branded drugs have marginal value! If that is true in general, then I guess pharmaceutical sales reps must select just the opposite kind of studies to present at their lunches with physicians. This “selectivity” of scientific evidence will only be exacerbated once FDA allows pharma sales reps to pro-actively provide peer-reviewed literature to doctors (see “Pharma’s New Marketing Partner: Medical Journals“).

Some PhRMA Board Member Opioid-Producing Companies are NOT Signatories to Its...