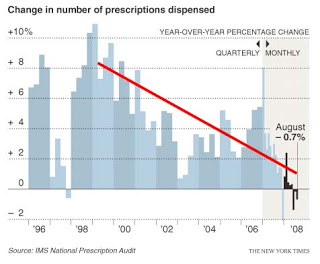 In the latest sign that the US pharmaceutical industry is in a recession, the New York Times reports that “through August of this year, the number of all prescriptions dispensed in the United States was lower than in the first eight months of last year, according to a recent analysis of data from IMS Health, a research firm that tracks prescriptions” (see “Some Cut Back on Prescription Drugs in Sour Economy“).

Even Lipitor, the best-selling drug in the world, is not exempt: United States sales of that drug were down 13 percent in the third quarter of this year according to Pfizer.

The main reason for this drop in Rx’s, according the Times article, is the economy — to which may I add “duh!” or “stupid!”?

Of course, this hasn’t hurt the profits of some companies like Pfizer who have already implemented cost-cutting programs (ie, laid off workers), benefited from a weaker dollar, and decided to focus on much more profitable biologics and/or generics (see “Chantix and Lipitor Sales Fall, But Pfizer’s Earnings Rise“, “Pfizer plans big push into generics“, and “Pfizer exits heart R&D in major overhaul“).

The Times article worries that “if enough people try to save money by forgoing drugs controllable conditions could escalate into major medical problems. That could eventually raise the nation’s total health care bill and lower the nation’s standard of living.”

This assumes that there are no alternatives to high-priced brand name drugs like Lipitor. Yo, Times reporter, heard of generics? I’ve been taking generic pravachol — NO copay — for over a year now and though I yearn for the status of taking Lipitor — the market leader — I’m not faced with the choice between gas and drugs!

“Yes, I’ve heard of generics,” I imagine the Times reporter responding. “Already, a migration to generic drugs means that 60 percent of prescriptions over all are filled by off-brand versions of drugs [I heard 70% at an industry conference yesterday]. But with money tight, even cheaper generic drugs may not always be affordable drugs.”

I can’t see how you can get any cheaper than $0. Of course, not everyone has health insurance or a plan that has $0 for generic drug copay like mine. If you are one of those people, I hope you vote for the right person on November 4 is all I can say.

In this economy, drug companies will need to follow Pfizer’s lead and re-invent themselves to stay profitable: essentially giving up the fight against generics and cutting back on research into drugs that will eventually become generics. Biologics are much more difficult to “genericize,” thus a safer investment.

But that’s a long-term solution and until recently investors were not interested in such solutions. Not any longer. See “Investors turn to pharma for yields.” While the authors of that article claim the reason investors are turning to pharma is because pharma is traditionally “recession proof,” it’s more than that. Economists are predicting a very long recession and this time pharma may come out of the recession sooner than other industries.

BTW, have you taken my “Is the Pharma Industry in a Recession Poll?”