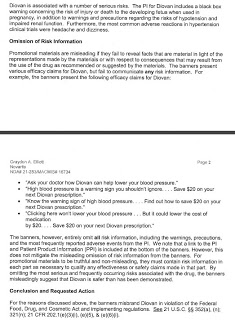 It has long been FDA’s position that no new guidance regarding pharmaceutical marketing via the Internet was necessary because the rules that apply to print and broadcast media also apply to the Internet.

Recently, however, the FDA issued a little-noticed warning letter (click on image at left to read the relevant section) that addresses a specific Internet marketing ploy: branded banner ads that mention a product’s indication and benefit without including fair balance (ie, risk information).

Pharmaceutical marketers and online partners (eg Google) have often justified these types of ads by invoking the the so-called “one-click rule,” which Jim Nail, CMO at TNS Media Intelligence/Cymfony, explains this way: “…there is no ‘official’ FDA one-click rule…there is a ‘received precedent’ that if you have one click from your brand site to the PI or labeling information, that is acceptable. Or call it ‘best practice’. Or call it just ‘common practice’.” I took issue with this thinking way back in November, 2007 (see “The “One-Click Rule”: Rant or No Rant?“).

Well, now pharmaceutical marketers have received a NEW precedent that may put to rest the “one-click rule.” I say “may” because Diovan is a special case: it’s package insert carries a “black box” warning. This type of notice is required for Rx drugs with serious side effects such as death! “Diovan is associated with a number of serious risks,” says the FDA. “The PI for Diovan includes a black box warning concerning the risk of injury or death to the developing fetus when used in pregnancy…”

I have always thought that pharmaceutical marketers avoided doing DTC broadcast and Internet display ads for drugs with black box warnings because they knew that the required fair balance statements would turn people off (to say the least). What Novartis did was use a the one-click “rule,” “received precedent,” or whatever to circumvent this. Just another Web trick for marketing dummies (see more tricks here).

It’s interesting, however, that this precedent has gone virtually unnoticed in the Pharma Blogosphere and trade press — the exceptions are a post on IgniteBlog by my friend Fabio Gratton in October (“FDA Warning to Diovan on Banner Ad … will there be more?“) and a two inch mention on page 28 of the December 2008 issue of MM&M.

Fabio had this to say: “Upon careful review of the words in the FDA’s letter, it appears they are insisting on the inclusion of risk information, warnings, precautions, and the most frequently reported adverse events INSIDE the actual banner — at least in this particular case (which will probably set a precedent).” It’s possible, however, that pharma marketers will look at this letter as a “partial received precedent” applicable only to cases involving drugs with black box warnings.

Here’s the relevant section of the warning letter:

“… The banners, however, entirely omit all risk information, including the warnings, precautions,and the most frequently reported adverse events from the PI. We note that a link to the PI and Patient Product Information (PPI) is included at the bottom of the banners. However, this does not mitigate the misleading omission of risk information from the banners. For promotional materials to be truthful and non-misleading, they must contain risk information in each part as necessary to qualify any effectiveness or safety claims made in that part. By omitting the most serious and frequently occurring risks associated with the drug, the banners misleadingly suggest that Diovan is safer than has been demonstrated.”

Jim Nail’s consulting company issued a Social Media Marketing Framework White Paper last year that reviewed the FDA’s published guidelines and attempted to demonstrate how they apply to the Internet and to social media.

“Pharmaceutical companies are missing a tremendous learning and consumer engagement opportunity with social media because they are uncertain about the FDA’s position on this type of marketing,” said Nail. “Our framework gives their marketing, legal and regulatory groups a common ground to design a social media strategy.”

BTW, Nail’s white paper is no longer available. I guess some re-writing is going on!

Can an In-home Electronic Pillbox Solve Our Medication Error Problem?