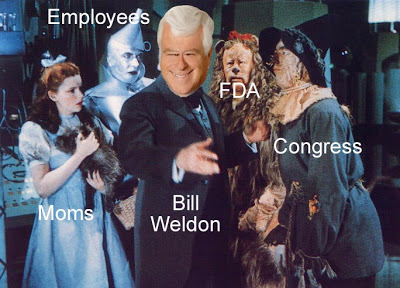 Johnson & Johnson’s (JNJ’s) has earned accolades from industry pundits for its social media expertise (see Dosie Awards, for example). Yet it’s handling of the McNeil Consumer recall of children’s medicines seems weak in general and very weak specifically with regard to the use of social media to reach out and engage consumers on the issue.

As reported in the Wall Street Journal, “Some parents say the recall has weakened J&J’s reputation for quality. The recall has also prompted a congressional investigation of the company’s handling of consumer complaints and the adequacy of the FDA’s inspections. The House Committee on Oversight and Government Reform has asked J&J Chief Executive William Weldon to testify at a hearing on May 27” (see “FDA Widens Probe of J&J’s McNeil Unit“).

The only response from JNJ via social media after issuing notices about the recall back in early May was a 253-word blog post by JNJ CEO Bill Weldon on JNJBTW (see “To All Who Use Our Products — From Bill Weldon“) and a series of Tweets from Marc Monseau, JNJ’s Director of Corporate Communication, linking to that letter (see below). 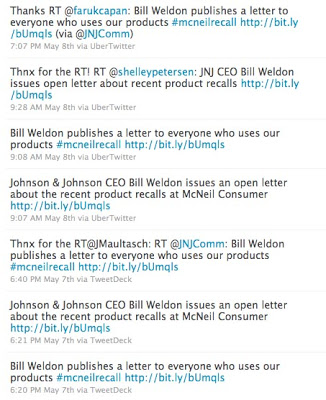 Meanwhile on other blogs like Bnet, Weldon is accused of being clueless (see “Tylenol Recalls: CEO Weldon Is Either Clueless or Lying, and Neither Will Play Before Congress“).

Thanks to PharmaGossip for Photoshopped image of Bill Weldon

Social media is often touted by drug industry experts as a tool to be used to “manage the conversation” or, at least, to participate in the conversation. But JNJ is not engaging or participating as much as I think it could or should. To his credit, Monseau has approved and published on JNJBTW blog several negative comments from moms, docs, and former JNJ employees, but Weldon has not responded or continued the dialogue.

NOTE: As Monseau points out in a comment to this post, he has responded to readers in relation JNJBTW posts on this topic (see “McNeil Announces Voluntary Recall“). Edwin Kuffner, MD, Vice President of Medical Affairs at McNeil Consumer Healthcare, has also responded to comments, but mostly to tell consumers to contact their doctors about problems with medications. What I was looking for, I guess, are further posts to JNJBTW keeping readers apprised of progress that J&J is making — especially from the CEO. The last comment by Monseau on May 4 was “I apologize that we are not able to provide you with more answers at this time. As dr. Kuffner explained, we are continuing to investigate these issues and we have shared as much information with you that we can.” Read into that what you want, but the news stories continue and the JNJBTW blog has been silent on these latest stories.

To recap: I feel that the issue deserves more than a single 250-word post by Weldon on a blog. It leads me to believe that Weldon’s appearance before Congress will be as engaging and forthright as was Goldman Sach’s and the oil industry’s.

BTW, after I posted “Trouble in the House that McNeil Built: Why Drug Company Silos are Useful“, I was quoted in an AdAge article:

“Deep down I do believe that J&J is keeping its stellar reputation partially due to the fact that it is siloed into many different operating units. It does seem to go out of its way to link the J&J brand to baby products and mom rather than Rx drugs, some of which have nasty side effects and even nastier marketing practices. That’s why Marc Monseau always — I mean always — prefaces his public statements saying that J&J is not a pharmaceutical company, it’s a health company. Imagine a bizarro Oz where the wizard behind the curtain is actually an evil wizard who appears to be doing good things. Of course, I’m not saying that J&J is evil; it’s just another drug company” (see “What’s Ailing J&J — and Why Isn’t Its Rep Hurting?“).