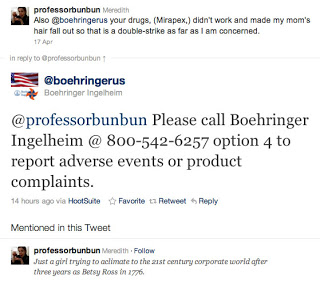 I follow many pharmaceutical companies (and employees of pharma companies; eg, these people) on Twitter. @BoehringerUS is one of them. To keep track of these accounts, I cross-post the tweets to this Pharma Marketing Forum (News Direct from the Pharmaceutical Industry), which automatically sends me a daily email message telling me what’s been posted there. It’s a good way for me to filter through all the tweets from the over 2,500 people I follow on Twitter.

Today, I received notice of the following tweet from @BoehringerUS:

I traced back the Tweet timeline of @professorbunbun — “Meredith: Just a girl trying to aclimate to the 21st century corporate world after three years as Betsy Ross in 1776.” — to find the tweet that triggered that reply from @BoehgingerUS:

Also @boehringerus your drugs, (Mirapex,) didn’t work and made my mom’s hair fall out so that is a double-strike as far as I am concerned.

Does this tweet by @professorbunbun satisfy FDA’s four criteria for a REPORTABLE adverse event (AE), namely:

The second criterion — identifiable reporter — is the problem. We don’t know the true identity of “Meredith.”

So, Boehringer did not have enough data to issue a report to the FDA, which has not (yet) issued any guidelines on what constitutes an “identifiable reporter” on social media. For more on that topic, see “Uncertainties Regarding Reporting Adverse Events Found on Social Media Sites.”

All this, however, is probably not the job of the people behind @BoehrinerUS, who are mostly public relations/corporate communications people — although I believe AEs SHOULD be their concern (see “Adverse Event Reporting — Pharma Puts Profits Before Patients. A Missed Opportunity“). Hence, the tweet telling @professorbunbun to call the 800 number.

Making a public announcement via Twitter on who to contact to report an adverse event is probably a good idea. Perhaps pharma companies should make such tweets from time to time even if they are not responding to a potential reportable AE tweet.

But I question the use of an 800 number in this age of technology, especailly when you are communicating with technically savvy people who use Twitter! Why doesn’t Boehringer — and other pharma companies — have a more convenient online mechanism for reporting adverse events DIRECTLY to the FDA as I suggested in this post: “Tit-for-Tat Tithe on Pharma Marketing. How It Can Work.”

BTW, the AE exchange between @professorbunbun and @BoehringerUS began almost as an after thought prompted by a different sort of adverse event suffered by Meredith herself: the failure of a Boehringer “resistance band” at the Parkinson’s Unity Walk (Boehringer was a Diamond Sponsor). Here’s @professorbunbun’s tweet about THAT adverse event:

Also, @boehringerus next time you hand out resistance bands at @unitywalk it might be a good idea to make sure they don’t snap at first use