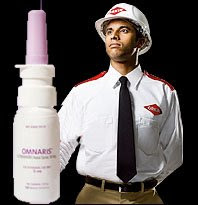 Last night at about 6:47 PM Eastern US time during the ABC Evening News, I saw for the first time a short ad — maybe a 30-second spot — for Omnaris, which is Sepracor’s new nasal spray for seasonal allergies. I may be mistaken, but I don’t recall hearing about any side effect information during this commercial. At least NOT in the voice over. I’m usually pretty alert to what’s being said in TV drug ads, so I find it hard to believe I missed it.

I also find it hard to believe that a company like Sepracor, which has a lot of experience with DTC advertising (it spent over $243 million on DTC advertising for Lunesta in 2007 — even allowing for Bob Erhlich’s 40% discount from reported ad spend; see here) could neglect to include fair balance information.

Therefore, if anyone out there also saw the commercial and can verify that the “fair balance” information was there, please let me know.

UPDATE: 3/30/2009. Tonight I was able to watch the ad again by flipping back and forth between ABC, CBS, and NBC news at around 6:50 PM. I just caught the “fair balance” statement when I flipped to NBC. It consisted on one sentence, about 5 seconds in length — basically, “side effects include headache, sore throat, and nosebleed.” No wonder I missed it the first time!

Although the ad may have mentioned all the major side effects and probably complies with the letter of the law, the “new” FDA may want to flex its muscles and cite this ad because there is quite a lot of time spent on the benefits and so little spent on side effect information.

The commercial explains that Omnaris works differently by easing inflammation in the nasal passageways. In it animated uniformed men with helmets — who look like Orkin pest control men — shove an Omnaris spray nozzle up some one’s nose. You then see the yukky inflammation recede. Something like that.

Obviously, this is not the first time the ad was run. On 24 March 2009, a Sepracor sales rep posted this to CafePharma:

I do not know who has seen the new Omnaris commercial, but It is BEYOND ridiculous! Where is the stick and stay messaging… won’t run down the back of your throat? Does not have a smell? No burning? Method of action?

It was beyond horrible. It basically looked like a commercial for Charlie and the Chocolate Factory with a bottle of Omnaris instead of a Wonka Bar.

Oh, and the $11 copay was written at the bottom of the last screen in tiny font! Don’t rely on that for an increase in Rx’s!

This rep saw Charlie Wonka, I saw the Orkin Man.

Of course, another sales rep was quick to pick up on the “stick and stay” reference and turn into a sexual joke too gross to repeat here. You can find the entire CafePharma thread here.

Ah, the wonderful world of DTC advertising! Is there anything else that can make the drug industry as easy target? Even it’s own people use the ads to skewer their marketing people!