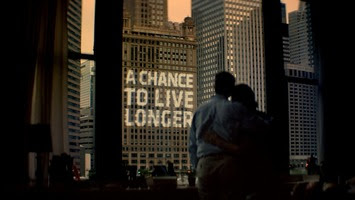 In a recent NYT OpEd piece, Matt Jablow, whose wife died of lung cancer, called the TV ads for BMS’s cancer drug Opdivo “utterly misleading and exploitive” and said that if BMS really wishes to thank patients like his wife who participated in the Opdivo drug trials, it should pull the ads (read the OpEd piece here).

The Opdivo ad had already been criticized during an investor conference call by a Deutsche Bank analyst who questioned the value of direct-to-consumer (DTC) ads to promote Opdivo (here). Of course, the analyst was more concerned about BMS wasting money on ads that would have no effect on the sales of the drug, which are likely to grow “whether or not the company promoted the drug to patients.”

The FDA has proposed (see here) to re-study the effect of superimposed text, or text placed over an image, on viewers’ understanding of a DTC ad like that for Opdivo, which super-impose the words “A Chance to Live Longer”on buildings in big, bold text.

Meanwhile, some drug industry advertising experts have criticized Jablow’s OpEd piece itself as being “disingenuous.”

One such expert is Bob Ehrlich, Chairman, DTC Perspectives, Inc. I just received via email his “DTC in Perspective” OpEd piece which was critical of Matt Jablow’s OpEd. Ehrlich said this:

“I agree the ad is majestic and bold in showing a headline about a chance of living longer. An ad always features the main benefit and is designed to get you to pay attention. No patient seeing this ad will think their cancer is going to be cured by Opdivo. They will at most ask their oncologist about the potential use for their case. The oncologist will explain benefit and risk and the added survival time will be disclosed.

“The idea that a patient will see this ad and have false hope is disingenuous. Any patient or family member of a patient with lung cancer is not going to read too much into the first five seconds of an ad. These patients will investigate the drug advertised and get a lot of information before using it.”

My take, however, is that the Opdivo DTC campaign’s goal is to enlist patients to put pressure on physicians (including oncologists) to treat them more “aggressively.” This is basically the goal of EVERY DTC ad and it is based on the drug industry’s belief that consumers DO believe the ad, especially what’s said in the first few seconds before they tune out at the end where all the caveats (“fair balance”) are mentioned.

[BTW, remember when Billy Tamzin was the CEO of PhRMA and said (here): “You will see a change in the [current] ads.” Instead of “mumbling” side effects at the end of ads, says Tauzin, “the [side] effects are going to be talked about in the ad.” Of course, that did not pan out. Why not? Precisely because consumers stop listening towards the end of the ad.]

In that conference call with investors mentioned above, Bristol-Myers Squibb CEO Giovanni Caforio defended the Opdivo ad because it “dispels pessimism created from a history of cancer drugs that lack ‘significant value’.” Obviously, Caforio also thinks that consumers – especially desperate consumers – believe cancer drug DTC ads, especially if the ads tout benefits in BIG letters on buildings and leave all the negative, pessimistic stuff at the end as a quickly-paced voice over.