Billy Tauzin, president and CEO of PhRMA, the drug industry’s US trade association, is a cancer survivor and gives credit to new expensive drugs for saving his life. He also believes that the best way to improve the health of all Americans is to continue to allow access to new therapies whatever the cost.

Tauzin gave a speech (“THE MIRACLE OF THE MARKETPLACE: HARNESSING ITS POWER – SHARING ITS BENEFITS“) at the 2005 Competitive Enterprise Institute Annual Dinner in which he said:

Many countries use a form of “health-care rationing,” coupled with price controls. Who, when, why, and how people get to use a drug doesn’t depend on whether they need it – it depends on whether or not the bureaucracy thinks it can afford it. These are policies that put government bureaucrats with a veto right in the examining room with patients and their doctors. Let me give you some examples.

Australians can only obtain a drug that can prevent osteoporosis after they have broken a bone. I guess no one ever told the bureaucrat in charge about an ounce of prevention being worth a pound of cure.

PhRMA often cites scary stories from other countries to make its point that the US has the best system for insuring that new, innovative medicines are available to people who need them to prolong their lives.

As reported in the PharmaGossip Blog, “the Association of the British Pharmaceutical Industry [ABPI; the UK equivalent of PhRMA] has issued a press release and published a manifesto [“The Right Medicine, The Right Patient, The Right Time”] that criticises the lower uptake of new drugs in the UK relative to other selected countries” (see “UK and new drugs: a dog market“).

Patients in the UK are still being short-changed by a system that is slow to pick up on new medicines and reluctant to prescribe them even when they have been recommended by NICE [UK equivalent of FDA].

“The pharmaceutical industry researches, develops and provides medicines that relieve suffering and improve health. We want to make sure that patients receive and benefit from them,” said Nigel Brooksby, President of the ABPI.

To prove its point that the UK is slow to bring new drugs to market, the ABPI provides the following data. For each country the percent of market share of new drugs (those available for less than 5 years) is shown in parentheses:

As you can see, the US is number one on the list with the highest uptake of new drugs. This is no surprise. As critics of DTC advertising have often pointed out, DTC causes the prescribing of newer, more expensive drugs when less expensive, equally effective drugs are already available. Therefore, DTC is bad. No so, counters PhRMA and ABPI. Access to new drugs is good because it improves health.

As the British Blog Prescribing Advice for GPs points out: “It is unclear if these data are based on items prescribed or drug costs. Additionally, there is no information in this manifesto directly linking the lower use of new drugs to increased morbidity and mortality internationally.”

That got me thinking! 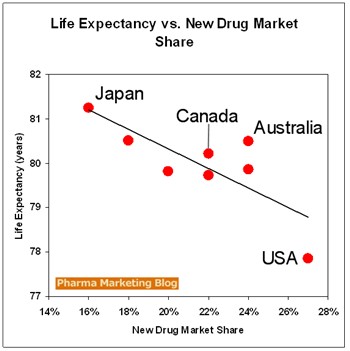 Is there a correlation between the uptake of new drugs and life expectancy, which is a measure of the overall health of a nation?

Just like Billy Tauzin, what I want most from new innovative drugs is to assure I get to live as many years as possible.

So I went to the CIA data site and found the latest stats on life expectancy and plotted that against new drug uptake rates reported by ABPI. I came up with the chart on the left.

Lo and behold! there does seem to be a correlation between these data. Unfortunately, it appears that it is a negative correlation: the higher the uptake of new drugs, the lower the life expectancy!

What can account for this? Billy Tauzin hinted at one possible culprit: “No doubt about it, drugs like these carry potential risk.” Billy is asking us to balance benefits and risks “People understand the concept of risk and reward — otherwise, how do you explain marriage? [whaaaa?!] But that understanding seems to break down when it comes to drugs.”

Hmmm… But if the benefits are not there, then I certainly don’t understand how to balance benefit and risk.