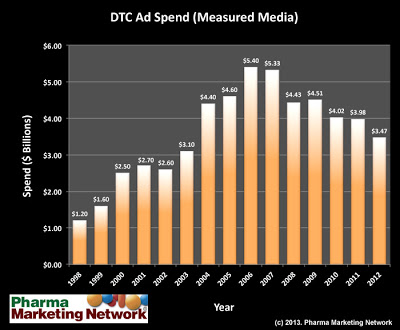 Based on early data from cegedim, it appeared that direct-to-consumer (DTC) ad spending by the pharmaceutical industry declined by 22% in 2012 compared to 2011 (see here). New Nielsen data, however, indicates that the overall decline in DTC spending was only 11-12%.

My fellow blogger, Rich Meyer (World of DTC Marketing), sent me the data from which I created the following table showing the “measured media” DTC spending for 2011 and 2012 broken down by medium (TV, Magazines, Newspapers, Internet, radio, and Outdoor): 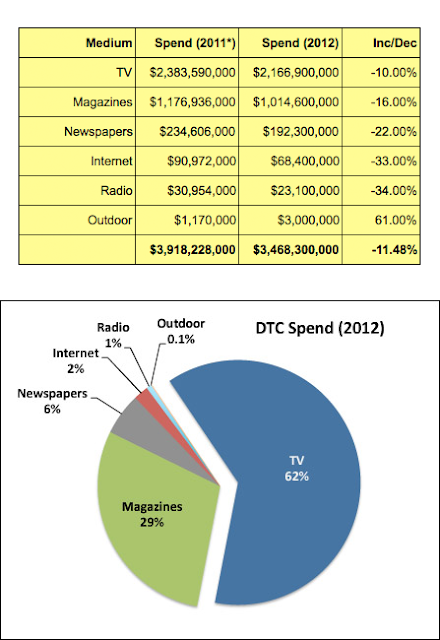 The numbers for 2011 were calculated from the percent increase/decrease (inc/dec) reported by Nielsen for each channel. The Nielsen data I have do not include the percent change of total DTC spending. I calculated that number (-11.48%) from the two totals.

You can’t put too much stock in the absolute value of these numbers because they are based on list pricing for ads. But you can put some stock in the trends. The 2012 drop is NOT the biggest decrease in DTC spending since 1998 as I had previously said. The drop in spending in 2008 was bigger: about 17%.

Meanwhile, TV ad spending decreased only a modest 10% whereas Internet display ad spending (excluding search) decreased 33%! This confirms my January 2012 prediction of a “recession” in pharma digital (see this slideshare presentation). Also note from the pie chart above that Internet measured media spending is only 2% of the total! This is a number that hasn’t changed much since 2000 when I started tracking it.

Why is Internet advertising by pharma taking such a huge hit?

Meyer asks basically the same question: “With so many people going online for health information one has to wonder why the love affair with TV and magazines at the expense of the Internet?” Meyer believes that DTC marketers are not up to the task of analyzing the data from Internet ad campaigns to confirm the superior ROI that can be had. “The problem,” says Meyer, “is that you need someone who can actually mine these numbers and present the results to DTC marketers. Obviously that doesn’t seem to be happening” (see “2012 DTC Media spending breakdown-Web neglected?“).

Some experts HAVE attempted to mine the numbers and inform DTC marketers. At least one (biased) expert claims that digital ROI can be as high as 5:1; i.e., for every dollar spent on digital advertising, you can gain $5 in sales. But I contend that this number may be OK for small $60,000 campaigns, but it may not be scalable and apply to bigger campaigns (see “Is Online Pharma Promotion ROI Scalable?“).

What is the cause of the downward spiral of DTC ad spending? Practically every expert points to the “patent cliff,” over which the industry has already fallen. There must be other factors. I have presented some data that suggests a role for the rise in biologics, many of which are too complicated and have too many serious side effects to be marketed via DTC. It’s not as if a consumer can “ask her doctor” for a specific cancer treatment regimen, for example. Although I do see DTC ads for biologics, I believe most biologics marketing dollars will be spent on physician and payer sales and marketing. So, even when biologics are advertised on TV, the ROI is not as high as for drugs with a much bigger potential patient pool. That would mean fewer TV and print ads.

For more on biologics impact on DTC, see the Pharma Marketing News article “Spending on Direct-to-Consumer Advertising Takes a Nosedive” (subscription — free! — may be required) and this Pharma Marketing Blog post.

Is the Pharma Social Media Bubble About to Burst?