Mike Pucci, Vice President of External Affairs at GlaxoSmithKline, is a man with a mission, which is to get the word out about the good that the pharmaceutical industry is doing (or, as Pucci expressed his goal: to “Restore the reputation of the industry by communicating the value of our products, our research and our hope for the future”). He spoke yesterday at CBI’s 8th Original Forum on Customer Relationship Management (CRM) for the Bio/Pharmaceutical Industry in Princeton, New Jersey.

Pucci believes the industry has just sat back and “taken it” and like the frog sitting in a tepid pot of water slowly being heated, the industry has acclimated itself to the increasing heat of negative publicity.

The pharma industry, says Pucci, needs to recognize that the climate around it is changing and it better get out of the pot!

“The consequences of having a reputation nearly as bad as the tobacco industry,” says Pucci, “are threefold:

Ordinarily, I would consider Pucci’s mission a lost cause, akin to pissing in the wind. That’s because all the good intentions and actions of people like Pucci are negated by shenanigans like PhRMA’s Terrorist Plot!

In this case, however, I agree with the main tenet of Mr. Pucci’s strategy — engage employees to spread the word by talking positively, sharing what they are doing, and explaining the value. Pucci even agreed with my suggestion that pharma should sponsor blogs written by employees.

As I have said before (see, for example, “Who Should Pay for Merck’s Obstructionism?” and “Vagelos Speaks. Will Pharma Listen?“), when pharma or other companies lose the public’s trust not only do the shareholders suffer, but the employees also suffer.

Strategy
GlaxoSmithKline, under Pucci’s leadership I assume, has been doing a good job using their employees as spokespeople. TV ads feature GSK scientists, for example. Scientists are good pharma spokespeople. They are usually dedicated to doing good, which comes across as a genuine characteristic in the ads, and they represent the image that big pharma wants to promote — i.e., that they are research based.

This national media campaign, however, is just one leg of Mr. Pucci’s and GSK’s strategy for the company’s “Value of Medicine Campaign.” The other legs are:

You might want to compare this strategy with the action plan developed by attendees of a recent conference and summarized in the Pharma Marketing News article “Marketing the Pharma Industry: The Empire Strikes Back.”

Key Messages
The key messages of the campaign are the familiar ones heard from other pharma execs (e.g., see “A Call to Action: A Mea Non Culpa by Big Pharma“):

I won’t dispute the veracity of these messages here, but I would note that not all pharma execs agree with all these tenets. McKinnell, CEO of Pfizer, for example, took exception with the first one. He said in his book A Call to Action: it is a “fallacy to suggest that our industry prices a product to recapture the R&D budget spent in development.” He suggests instead that it is “investors’ confidence in the risk and rewards” that drives prices.

Tactics
Anyway, for me, the real story is the tactics GSK is employing to get these messages across:

Pucci claims that the campaign combining key messages with scientist ads is working. He cites Harris survey data from March 2005 showing that 56% of voters surveyed gave the pharma industry a positive rating compared to 44% in 2004. Of course, there may be other factors involved as was pointed out by another speaker, such as (1) the Medicare Drug Benefit, and (2) advertising about drug discount cards.

Side Benefit: Boost to Employee Morale
Pucci’ s call to action is to entice other pharma companies to copy GSK’s campaign and he encourages them to copy the messaging and tactics. So far, Pfizer and Eli Lilly have taken him up on his offer. Interestingly, Lilly did so primarily to boost the morale of its employees.

Role of PhRMA
A couple of members of the PHARMA-MKTING Online Discussion Group suggested that PhRMA should get involved. Terry Nugent, for example, stated “I commend GSK, but where is PhRMA? Each company continues to do its own thing. The divided are conquered.”

Ann Poorboy had this to say: “Individual pharma companies have long touted their “citizenship” efforts and their helpful attitudes towards ensuring all patients receive quality care. But the industry must come together. If PhRMA isn’t working to improve the condition of industry, have they met their objective?”

The main advantage of GSK’s strategy — the use of credible EMPLOYEES to get the messages across in a grassroots campaign — cannot be directly exploited by PhRMA.

Pucci included a slide (see CHART below) that showed that the credibility of corporate communications (communications issued by companies, company website, or CEOs and CFOs) was very low among US consumers (only 11% cited CEOs as credible sources of information) compared to colleagues, friends and family, and regular employees (25% cited regular employees as credible sources). [Source: Pharmaceutical Executive Magazine, April 2003.] 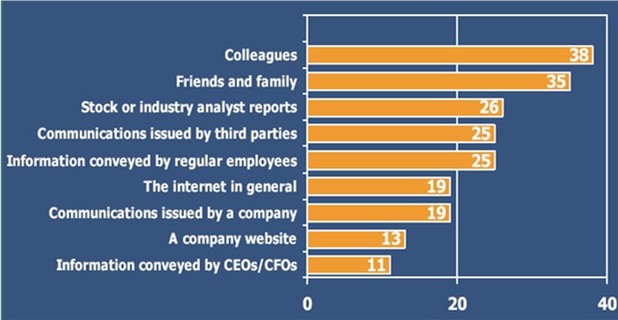 Communications from PhRMA are probably even less credible than from company CEOs! However, PhRMA could and probably should “orchestrate the activities of all the companies” as Terry suggests. “whatever the strategy,” Terry says, “all the companies need to act in concert to maximize effectiveness. It’s PhRMA’s job to orchestrate that — or it shoud be, in my opinion.”

OK. Either that or one company such as Glaxo can take the lead and orchestrate it. What’s the difference? As long as it’s done right.

Another idea suggested by Terry was to use celebrities like Oprah Winfrey. I don’t think this is a good tactic, even though celebrities probably are very credible sources of information among consumers. I am not sure how well it would work, especially if the celebrity revealed that PhRMA was paying her to deliver messages concocted by the pharmaceutical industry. And if the celebrity does not reveal the financial ties, that would be even worse — it’s bound to come out sooner or later! For more on this topic, see “Celebrities & Buzz Revisited“.

Does FDA Guidance About Pharma Communications with Payors Open a Path...