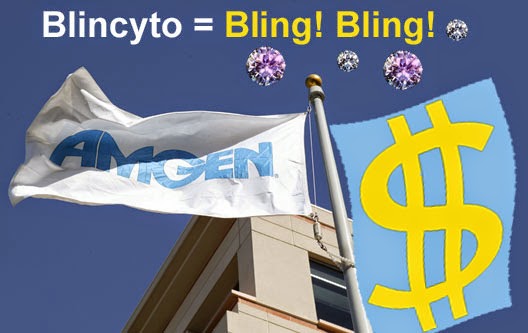 FDA approved Amgen’s Blincyto (blinatumomab) on December 3, 2014, as a second-line treatment for Philadelphia chromosome-negative precursor B-cell acute lymphoblastic leukemia, which affects around 6,000 patients in the US.

The price tag of $178,000 per two-cycle course makes it one of the most costly drugs on the market.

FDA considers Blincyto a “breakthrough” therapy, which means preliminary clinical evidence demonstrates the drug “may have substantial improvement on at least one clinically significant endpoint over available therapy.”

On FDA Voice (FDA’s blog), commissioner Margaret A. Hamburg said “Consider for example, Blincyto, approved just last week to treat Philadelphia chromosome-negative precursor B-cell acute lymphoblastic leukemia. CDER employed all of its expedited review programs to help get this drug to market as early as possible, five months ahead of its review goal date. The sponsor also benefited from incentives for drugs that treat rare diseases.”

Despite the extraordinarily high price of Blincyto, payers are not likely to complain about the price as much as they complained about the price of Sovaldi. Read on to learn why I believe that is true.

It’s simple. Whereas if all the 3.2 million patients in the U.S. were treated with Sovaldi to cure their Hep C infection, it would cost payers (insurance companies and Medicare/Medicaid) $378 billion at $84,000 per treatment. That, of course, is the wholesale price, not the discounted price.

In comparison, to treat all the 6,000 leukemia  patients with Blincyto at the wholesale price of $178,000 per patient, payers would have to shell out only $1.07 Billion, which is a mere pittance compared with the cost of Sovaldi treatment, wholesale or discounted.

Another reason may be the type of patients who suffer from Philadelphia chromosome-negative precursor B-cell acute lymphoblastic leukemia versus Hepatitis C. A good portion of the latter group are probably low-income, drug abusers, and/or minorities whereas leukemia patients could be you or me.

BI Masters the Art of WOM through Its “Parrots,” er, Spokespersons