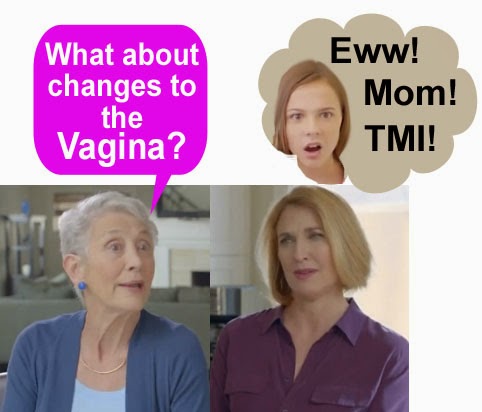 Pfizer marketers have done it again! First it was an all-female Viagra ad campaign for the treatment of ED (erectile dysfunction; read “Oh Yeah, Baby! Show Me More!… Viagra TV Ads Like This. But Don’t Let My FDA See It!“).

Now, it’s an all-female disease-awareness ad campaign about “vaginal atrophy,” which appears to be a symptom of menopause that women don’t talk about – hence the name of the video featured in the campaign: “The Talk” (it’s embedded at the end of this post).

Three generations of women — a teenager, her mom, and her grandma (mom’s mom) — act out how difficult it is for women to talk about “woman problems” as my mom would say.

The mom first tries to talk to her teenage daughter about “becoming a woman.” “Mom! I know!,” says the daughter as she slams her bedroom door. Then, the mom acts the same way when her mom tries to talk to her about menopause. But her mom comes straight to the point: “What about changes to the vagina?,” she asks. Grandma then “changes the dialogue” and specifically talks about vaginal atrophy.

Changing the dialogue — the tagline for Pfizer’s letstalkaboutchange.com website — is what Pfizer hopes this campaign accomplishes because it has a drug to sell: ESTRING – “a local estrogen therapy used after menopause to treat moderate-to-severe menopausal changes in and around the vagina.”

Will this ad be criticized as was the Viagra ad?

Recall that John LaMattina, Former Pfizer President of R&D, was pretty upset about the sexy Viagra ad and called on Pfizer to “drop it” (see “New Viagra TV Ad – as Well as All Other #Pharma TV ads – Should Be Dropped, Says Former Pfizer Executive“). LaMattina was concerned that parents would have a hard time explaining the ads to their children who might be exposed to them. Not to mention the prurient nature of the ads themselves (for more on that, read “Oh Yeah, Baby! Show Me More!… Viagra TV Ads Like This. But Don’t Let My FDA See It!“).

“The Talk” campaign, however, is in no way sexually suggestive. The content, however, is for mature audiences also, so I wonder if Pfizer would put limits on where and when the ad runs. Right now, it’s only a Youtube/web video campaign. I’m not sure we’ll be seeing it on TV.

NOTE: Keep in mind when watching this video on Pharma Marketing Blog that Pfizer does not support versions of the video seen here or any where else except “within the context of its original location online.” Whatever that means!

The Hawaiian Shirt is Back from Italy and Ready for the...