Occasionally, I predict the next frontier in pharmaceutical marketing. Back in September, 2005, for example, I predicted that “sleep aid” DTC (direct-to-consumer) advertising would be the next BIG thing (see “Insomnia – the Next DTC Frontier“). These days, you cannot escape the ads for these drugs, some of which — namely Lunesta — have ignored the industry’s guiding principles for DTC advertising (see “Lunesta/Ambien/Sleep Aid Drug Blog Topics” for more information about that).

What’s next? The next BIG focus for DTC advertising will be obesity treatments.

Leading the pack in this category is Acomplia marketed by Sanofi-Aventis. This drug, which supposedly suppresses your craving for fatty foods, is set to be approved in the EU this summer and in the US by the end of the year (see the Sanofi-Aventis press release).

Fait accompli! Or should we say “fat acomplia”? Read on to see if Acomplia will be successful in the US market.

[By the looks of the following image, the emergence of obesity drugs may just be one small step for the EU, but a giant leap for the US market. Thanks to PharmaGossip for this image.] 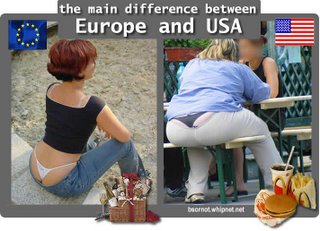 However, let’s look at the data a bit before we get all worked up about this.

“In trials of Acomplia, those taking the drug shed between 5% and 10% of their body weight if they stayed on the drug for two years…” (see “All Eyes on the Obesity Prize“). OK. That’s something, even if not spectacular.

But Acomplia is not indicated as a stand-alone treatment for obesity. According to Sanofi-Aventis, the indication statement for Acomplia will be: “As an adjunct [emphasis added] to diet and exercise for the treatment of obese patients…or overweight patients… with associated risk factors, such as type 2 diabetes or dislipidemia…”

So, why do we need an “adjunct” treatment that does no better than diet and exercise? Simple. The drug can do it alone and that is how it is going to be marketed (with a nod to diet and exercise as in Eric Idle’s “wink wink, nudge nudge, say no more” sense). Since PhRMA guidelines recommend that virtually all DTC ads mention diet and exercise, Acomplia ads will not stand out in this regard.

Will Acomplia be a success in the US? Obviously the market here is HUGE (see photo above). According to the 2005 National Health and Wellness Survey, 77.2 million Americans are obese and 65.9 million more are overweight. That alone spells B-L-O-C-K-B-U-S-T-E-R! Unless, of course, it is associated with heart-valve or other life-threatening side effects (as was the case years ago with another weight treatment drug combination).

A simple pill — instead of diet and exercise — appeals to Americans who are primed to medicate themselves at the tip of the hat. However, Americans also like quick results in order to celebrate victory, which as we all know is an elusive prize. In this regard Acomplia’s 2-year waiting period (before victory is achieved) may not suit the American psyche.

Linking Obesity with Insomnia
It turns out that obesity and insomnia are linked, according to the study mention above. Of the one-third of Americans who say they are obese, almost half report problems sleeping. This link was played up in the recent issue of Pharmaceutical Marketing Executive Magazine (“Meet the Patients: Insomnia and Obesity”).

The industry, in other words, is priming itself for a “difecta” — two drugs in one (Vytorin is the model — see “Two Sources of Zocor“). This, of course, would be the life-cycle endgame plan for these drugs. Perhaps Sanofi-Aventis will buy Sepracor!

BTW, it amazes me how industry pundits can cite the same study — ie, 2005 National Health and Wellness Study — to make their case for marketing new products while at the same time disparaging the study for showing that US citizens are much less healthy than UK citizens despite spending more per capita on healthcare and despite having supposedly better access to drugs and healthcare. All that data, which doesn’t support the utility of DTC for improving health, has been suppressed in industry publications like Pharmaceutical Executive Magazine.