As reported in the Philadelphia Inquirer:

“This week, Merck & Co. Inc.’s patent on the No. 2 cholesterol drug Zocor will expire, clearing the way for generic versions and guaranteeing huge savings for patients and insurers.” (See “A shake-up beyond Merck“).

The good news is that Merck can sidestep the whole problem with a product that keeps Zocor, the brand, alive — it’s called Vytorin! 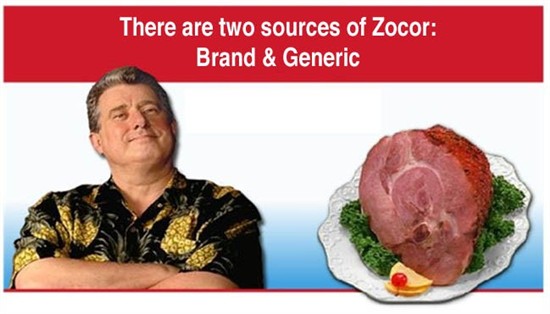 What Are You Doing About
The 2 Sources of Zocor?

You’ve heard it, maybe even said it: Zocor comes from Merck. What you may not have heard is that soon there will be a cheaper generic version of Zocor available.

If your still are taking the brand drug after that, it may explain why your drug bill could still be high, even though you’re trying hard to lower prices.

Generic drugs are important parts of lowering drug prices. Get helpful tips from your pharmacist.

You see, in addition to the Zocor that comes from Merck, simvastatin (the active ingredient in Zocor) will soon also be produced by companies your never heard of (Dr. Reddy, Teva, and Ranbaxy)–which means your mom, your dad, even your grandparents can save money.

So, if you’re having a hard time lowering your drug costs in spite of spliting your brand pills, don’t blame yourself. Almost everyone’s cholesterol drugs will come from 2 sources sooner or later. And taking the right one is an effective way to lower your monthly drug bills. “Lower is Better!”

The two forms of Zocor aren’t right for everyone, including women who are nursing or pregnant or who may become pregnant, and anyone with liver problems. Unexplained muscle pain or weakness could be a sign of a rare but serious side effect and should be reported to your doctor right away.

Pfizer — maker of competitor Lipitor — says that Zocor/simvastatin doesn’t have data to prove it prevents heart attacks and strokes like Lipitor. Ask your doctor!

P.S. Cholesterol Drug Sales in US Through 2005 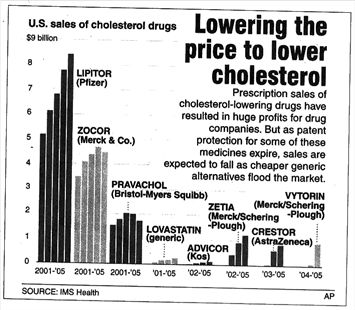 Chantix May Help Curb Yen for Alcohol. What Would the DTC...