The “Food” part of the Food and Drug Administration (aka, FDA) lately seems more interested in promoting public health and safety than the “Drug” part.

According to an AP story, “On Monday, the Food and Drug Administration [invited] food companies, trade groups, watchdog organizations, medical experts and its overseas counterparts to share how front-label symbols, like the ‘traffic light’ system used in Britain, can improve public health” (see “FDA Asks Groups to Consider Food Labels“).

The “Traffic Light” system adopted by the UK Food Standards Agency that the FDA is talking about is illustrated on the left.

Of course, nothing may come of this, just as nothing came of FDA’s promise in 2004 for a “Drug Watch” site that would make it easier for consumers to find emerging safety information about the drugs they are consuming (read FDA’s promise here: “FDA Drug Watch Site Guidelines“; then read about its promise reneged here: “Drug Safety – A Mere Asterisk to the FDA“).

After the FDA’s initial promise, when it asked the public for comments (that it promptly ignored, except for the comments against the idea from the drug industry and its lobbying/PR minions), I submitted a proposal that is very similar to the “Traffic Light” system the UK uses for food labels (see “Proposal for a Drug Risk Advisory System“). 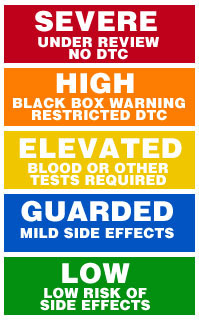 My system was based on the Homeland Security color-coded risk system, which was popular back then (see image at right).

I think such a color-coded system would be helpful in communicating drug risk information to the public. It gives a high-level summary of risk that even health jargon “illiterate” consumers can understand at a glance. Unlike other proposed symbols for drug risk, ie, the black triangle, a color-coded scheme allows some nuance about the level of risk.

If you are interested, you can read more about my idea and see my comments to the FDA here: “Proposal for a Drug Risk Advisory System.”

Therefore, it would be nice if the “Drug” part of the FDA “invited” drug companies, medical experts, consumer advocacy groups and watchdogs (woof!) to consider my color-coded drug risk alert system or a system modeled after the UK “Traffic Light” scheme for drugs.

Yeah, that could happen! I guess we are stuck with the antiquated “Black Box.”

Pharma Spends What on eSales?