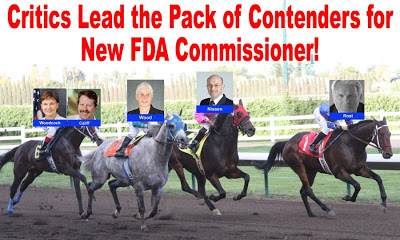 In a surprising turn, three outspoken critics of the FDA are in the lead in my “Who Should Obama Nominate for FDA Commissioner?” survey! In order, the 5 leaders as of today are:

Peter Rost, Steve Nissen, and Susan Wood have all been very critical of the pharmaceutical industry in general and the FDA in particular. Rost is a drug industry whistle blower; Nissen is a cardiologist who has often tangled with FDA’s handling of drug safety information; Susan Wood worked inside the FDA until she resigned in protest (see more details about these and other contenders within the survey site).

It seems that the same sentiment that propelled Barack Obama into the presidency — ie, “change we can believe in” — is also guiding respondents to my FDA Commissioner survey.