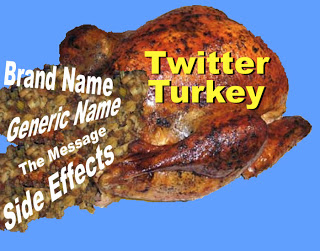 It’s Thanksgiving tomorrow here in the U.S. and that means turkey, which is usually stuffed with breading, sausage, ducks, chestnuts, chicken, whatever!

More often than not, we Americans like to OVER stuff that bird because its our tradition to stuff ourselves on Thanksgiving with … stuffing! The turkey is just the medium, but stuffing is the message.

Similarly, pharma marketers stuff as much as possible in tweets. But when it comes to brand promotional tweets, it’s difficult to “over stuff” that Twitter bird! That’s because of FDA regulations regarding the necessary ingredients in branded tweet stuffing; i.e., brand name, generic name, and major side effects. That doesn’t leave much — if any — room for the promotional message.

Oh sure, it’s possible to stuff two of the three ingredients in there — brand name and generic name plus a short promotional message. But side effects? No way.

But what if the FDA were to allow branded tweets WITHOUT the generic name, which can be a long tongue twister that uses up a lot of characters?

Just in time for the holiday this year, FDA released the revised draft guidance for “Industry Product Name Placement, Size, and Prominence in Advertising and Promotional Labeling” (access it here). It was hoped this revision of the 2012 guidance document would allow branded tweets that did not include the generic drug name. But alas, that did not happen.

Digitas Health Vice President/Group Director of Regulatory Review Dale Cooke told Med Ad News Daily, “If I, for example, am sending out a text message to a patient who is already on therapy reminding them to take their meds, it would be nice if it were possible to not have to include the generic name in that communication” (here).

That would be nice indeed! But FDA is not Santa Claus, Dale. Just sayin’

Days of Live Pharma Reps are Numbered: M&A’s and Outsourcing –...