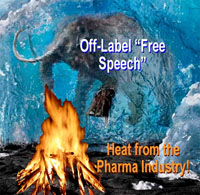 In what’s been described as a “surprise move” (here) the FDA recently published a notice that it will hold a 2-day public hearing this November to obtain “input on issues” related to off-label product communications about by pharmaceutical and medical device companies. FDA defines off label use of drugs as, “Use for indication, dosage form, dose regimen, population or other use parameter not mentioned in the approved labeling.”

FDA’s authority to prevent or even regulate off-label promotion by pharmaceutical companies is dwindling. After losing to Amarin in court (“FDA Deal with Amarin: Does It Mean More or Less Off-Label Promotion?“), FDA suffered another setback when it settled a case with Pacira Pharmaceuticals (here).

In both cases, the plaintiffs argued that off-label marketing was protected free speech as long as the information was truthful and not misleading. While the FDA still insists it has the ultimate authority to decide what is and is not truthful, other entities – most notably the Washington Legal Foundation (WLF) – have claimed a stake in the debate.

FDA issued some “draft guidance” in February, 2014, but this did not mollify WLF, which claimed that the guidance document is in “direct violation of a 1998 permanent injunction (WLF v. Friedman) it obtained against the agency to prevent it from trampling on industry’s purported First Amendment rights.” WLF said it “intends to enforce its injunction and will seek contempt of court citations against FDA officials who violate its terms” (read “WLF to FDA Regarding Distribution of Off-Label Reprints: See You in Court!“).

The FDA cannot win the “First Amendment” battle and has hinted in the public hearing notice that it may have to allow pharma companies to engage in off-label communications directly to “patients and consumer audiences” and not just to physicians.

If you stay awake reading the Federal Register Notice (here) and get to the questions for which the FDA is seeking input, you’ll find this unusual set of questions:

“To what extent is it appropriate for firms to communicate information about unapproved uses of their approved/cleared medical products to patient and consumer audiences [my emphasis]? What disclosures and additional information would be needed to help ensure that a communication to lay audiences is truthful and non-misleading, given consumers’ lack of medical training and expertise in critically evaluating this type of information?”

Maybe I am reading too much into this, but since the First Amendment applies to mere mortals (e.g., the American public) as well as to corporations and physicians, and the First Amendment trumps FDA regulations, I believe we may see a new era of Direct-to-Consumer drug advertising – and era where off-label uses are promoted via print ads first and then TV ads as well.

This may happen first with ads for cancer drugs. According to Consumer Reports Health (here) the “National Comprehensive Cancer Network — an entity made up of cancer treatment centers — estimates that 50 to 75 percent of all use of cancer drugs in the U.S. is off-label.”

It’s only one small step for cancer drug ads to mention those off-label uses as well. FDA may suggest legally-binding rule making changes (as requested by the drug industry), rather than issuing guidelines that have no legal standing viz-a-viz First Amendment rights. FDA asks:

You Must Score Better than 84% on Viagra’s Sexual Health Quiz...