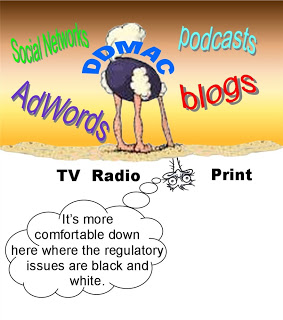 This just in: FDA Won’t Issue Specific Guidance for Youtube, Facebook, or Twitter. Claims These Media Are Just Passing Fads! Now Back to Your Regularly-Scheduled TV Ad.

During his presentation at the just-concluded ePharma Summit in NYC, Abrams said FDA would NOT “do guidance on specific technology platforms such as YouTube, Facebook, or Twitter. Those things are really big now, but you know what, two years from now who knows what the next thing [will be]?” Abrams also pooh-poohed Groupon

Abrams then threw the ePharma Summit audience a bone by spending several minutes analyzing one specific internet-based drug promotion: the Derma-Smoothe website. Using several colorful screen shots, Abrams drove home the point that NONE of the violations — Omission and minimization of risks, Overstatement of efficacy, Unsubstantiated superiority claims, Broadening of the indication — had anything to do with the Internet. It was all about the message, not the medium.

Unfortunately, the Derma-Smoothe site that Abrams used as an example was nothing more than a printed brochure repurposed as a web site.

We are being conditioned by the FDA and other regulatory experts not to expect much guidance regarding specific Internet technologies such as Twitter. “It is unlikely,” said Paul Savidge, General Counsel at BMS, “that the FDA will move away from the regulations that apply currently to print and broadcast media. If the expectation is that the FDA is going to somehow carve out electronic media or social media, that’s probably unlikely.” Instead, Savidge suggested the guidance will merely reiterate the basic rules that apply to other media.

I asked point-blank why the “media-agnostic” approach is expected for Internet guidance, when the FDA “carved out” TV — actually “television, radio, or telephone communications” — as a special case in 1999 when it released specific guidance on how to adequately inform consumers where to get complete prescribing information. The FDA recognized that it was impractical to include the complete prescribing information in a 60-second TV ad. The guidelines said providing a web site, 800 number, or magazine ad within the ad would be sufficient.

My question was why wouldn’t the FDA also publish SPECIFIC guidelines for social media SUCH as Twitter where space is also limited?

What followed was a complicated discussion about why TV deserves special guidance whereas the Internet does not. One regulatory expert said that TV ads are “limited by time and space” (ie, the 60-second ad), whereas the Internet is NOT. “It seems,” this person said, “that there is limitless amounts of information that you can put on the Web.”

Nowhere in that discussion did the experts mention Twitter or Google Adwords, which cannot include “limitless amounts of information.”

P.S. Meanwhile, in a white paper released today (find it here), AstraZeneca said: “The FDA should recognize that social media is a new communication channel that both distinguishes and can appear to intermix the dissemination of information and advertising in the digital space.” That doesn’t sound media-agnostic to me!

The 10 Most Important, Awesome Pharma Marketing Highlights of 2010